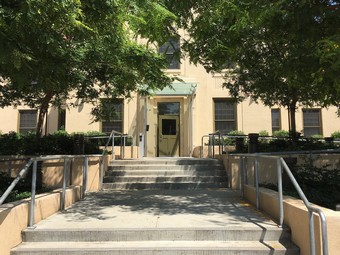 A vast green space in one of the poshest neighborhoods in Los Angeles is slated to become a haven for homeless Veterans. That's a big change for the campus of the VA West Los Angeles Medical Center.

For years, parts of the property were illegally rented to a variety of commercial enterprises having nothing to do with helping Veterans. This month, two men involved in those deals will be sentenced to federal prison for bribery and fraud.

The nearly 400 acres of the VA West Los Angeles Medical Center were donated in the 19th century to be a home for old and disabled soldiers. But the land hasn't been used that way in decades. More recently it's been home to parking lots for school buses and rental cars, a commercial laundry for hotels, a storage facility for TV shows, among other uses having nothing to do with Veterans.

So when he became secretary of the Department of Veterans Affairs in 2014, Robert McDonald examined all of those rental agreements. "The money didn't add up," he says. "There was some indication of payoffs, of bribery."

He added, "if we found monkey business, we turned it over to the FBI."

There had been no public accounting of what the VA West Los Angeles took in from these rentals or where the money went. NPR obtained documents in 2012 that showed the rentals at the VA had brought in at least $28 million and maybe more than $40 million. At the same time, there was no action on plans to create housing on the campus for homeless Vets.

McDonald says the parking lot deals looked particularly fishy. "If there's a sweetheart deal going on, who made that sweetheart deal and what are they getting out of it?"

A man named David Richard Scott got a lot out of those deals. He had the parking concession on the campus and lied about how much money he took in. As a result, the VA didn't get what it was owed. According to court documents, Scott shortchanged the government more than $13 million. In May, he pleaded guilty to fraud, forfeited millions in cash, cars and real estate, and agreed to serve nearly six years in prison.

Scott got away with the scam because he was bribing another man named Ralph Tillman, who oversaw all the rental deals on the VA campus. Tillman has also pleaded guilty and faces a maximum sentence of eight years in prison.

"We need to rebuild Veterans' trust in what we're doing on this campus," says Meghan Flanz, who is in charge of turning the VA West Los Angeles campus into a community for at least 1,200 chronically homeless Veterans. The plan was part of a settlement of a lawsuit brought by homeless Vets.

Despite the history of conflict and corruption at VA West Los Angeles, Flanz moved from Washington, D.C., back to her native Southern California to take what she describes as her dream job.

"This is a moral imperative," she says. "There are Veterans who need housing. We've got the space to house them. The property was deeded to us to house them. So we will get this done."

The vision is huge. It encompasses not only housing with on-site services but places for residents to socialize, to get job training, to make music and art. The obstacles are also huge. They include the need to find funding to renovate some of the campus's many empty buildings or build new housing from scratch.

But the VA does not foot the bill for Veteran housing. It is now trying to hire a developer who knows how to piece together funds from an assortment of local, state and federal programs.

So out of the 1,200 or more Veterans who might someday live on the campus, there are now just 54 who do — all of them in Building 209. It's the only one that has been converted to housing so far. William Williamson loves it.

"I look at it this way: It was God-given to me," he says, "and I bless him and the people here at the building every day I wake up."

Williamson was a jet mechanic on an aircraft carrier during the Vietnam War. When the Navy was no longer his home, sometimes prison was.

He says he did time for various things, "like grand theft auto," but "mostly [for] manufacturing drugs." The last time he got busted, he went away for 10 years.

He lost his permanent housing three years ago in a roommate dispute. Then it was couch surfing, a shelter and, eventually, the street. That was "eye-opening," Williamson says. It was especially scary at night, "when you try to find a place to sleep, 'cause you never know what's going to happen."

Now Williamson lives close to all his doctors at the VA Medical Center who help him with his asthma, heart problems and nerve damage in both legs. And the social services in the building help him with everything from military benefits to grief over the death of a friend. An outside organization called Step Up on Second provides those services. But Tod Lipka, the CEO, says there's one thing his organization can't provide for the residents here — community.

"Most people want to live in a neighborhood where other people are, but right now, for the first tenants, there's no other housing on the campus," which can make them feel isolated, Lipka says.

That will change. Two more empty buildings next to 209 are about to be converted to housing. But the renovations won't be done for almost two years. Even then, there will be just over 170 formerly homeless Vets living on the campus. That's a small fraction of the number the VA hopes will someday live at this former home for old and disabled soldiers.