After years of work, cabins for homeless Veterans open on Togus campus

After years of work, cabins for homeless Veterans open on Togus campus 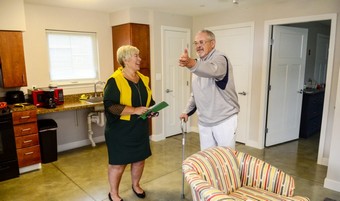 The cabins will house up to 21 Veterans and were built on land leased from the U.S. Department of Veteran Affairs.

TOGUS — Tim Buckmore is delighted by his new digs, even if the cable TV hasn’t arrived yet.

Until this summer, Buckmore, 57, was one of dozens of homeless Veterans living in Maine. Now, he’s among 19 Veterans who have moved into small houses on a quiet corner of the VA Maine Healthcare Systems-Togus campus.

For at least seven years, various organizations and agencies have been developing the so-called “Cabin in the Woods” housing project, which cost $5.1 million to build and is located on 11 acres of land that have been leased from the U.S. Department of Veterans Affairs.

On Friday, they celebrated the project’s opening with a ribbon-cutting ceremony that was attended by more than 100 guests and dignitaries. The project is part of a larger effort to end Veteran homeless and was developed by Volunteers of America Northern New England, a Brunswick-based group.

Of the roughly 2,280 people who were homeless in Maine last year, 131 were Veterans, according to U.S. Census data compiled by the U.S. Interagency Council on Homelessness.

Multiple Veterans who have received new housing through Cabin in the Woods said Friday they appreciated the natural surroundings and lack of noise pollution on the 11-acre property, where 21 cabins have been built. Each of the properties are free-standing and contain one or two bedrooms. The site also includes an office and community space, and is within walking distance of the medical facilities on the 500-acre hospital campus.

Buckmore, who worked as a generator mechanic in the U.S. Army from 1983 to 1989, has been intermittently homeless for the last three years. He first learned about Cabin in the Woods from a social worker at the Bread of Life Ministries’ Veterans shelter in Augusta. Now, he particularly appreciates the quiet natural setting and the radiant heating that comes out of the floor of his one-bedroom cabin.

“This is really nice and quiet,” said Buckmore, a Gardiner native, during a tour of the pre-furnished home. “I’d like to see more of these go up.”

This past summer, Buckmore suffered two strokes and now uses a cane and wheel chair to move around. As someone who has worked in the mental health field and been diagnosed with depression, anxiety and bipolar disorder, he also hopes the new housing will bring stability to a vulnerable population of Veterans.

“There’s a high suicide rate among homeless Veterans,” he said. “Something like this can help take their mind off anything bad they’re thinking about.”

Buckmore’s one qualm, he said, is that Spectrum has yet to run cable television to the new homes. But he added, “That could be a blessing in disguise.”

Multiple groups provided funding and donations for the Cabin in the Woods project, including the Maine State Housing Authority, the U.S. Department of Housing and Urban Development, the Home Depot and T.D. Bank Charitable foundations. At the ceremony on Friday morning, officials from some of those groups delivered prepared remarks.

There were also speeches by two members of Maine’s congressional delegation, U.S. representatives Chellie Pingree and Bruce Poliquin, and delegates for U.S. senators Susan Collins and Angus King. Also attending the event was Poliquin’s predecessor as representative of Maine’s 2nd District, Mike Michaud, who served as chairman and ranking member of the House’s Committee on Veterans Affairs.

Another speaker was Ryan Lilly, the former director of the Togus system who was recently elevated to another role in the U.S. Department of Veterans Affairs: director of its New England systems.

Just as some cities have eradicated poverties in their homeless populations, Maine is trying to do the same, Lilly said. After the ceremony, he said the Togus campus still has between 30 and 50 acres that could be developed and that the agency is now considering whether it could lease out land for a similar project oriented toward seniors.

“It was our first experience with this process,” Lilly said. “We’re thinking about what we can do next.”

While there are other housing developments for Veterans around the country, Lilly said that Cabin in the Woods is unique because it’s in a secluded area and its units are individual homes, as opposed to apartments.

Another Veteran to benefit from the new housing project is Jesse McGahuey, 41, who last month moved into a two-bedroom cabin with his wife Sheena, 33, and their 5-year-old son, Jerrick. While living on federal land isn’t a perfect arrangement, they said that the arrangement has made it considerably easier for McGahuey to attend his weekly medical appointments at Togus.

McGahuey suffered a series of injuries during and outside his service in the U.S. Army from 2000 to 2002. As a child, he suffered a brain injury. Then, when he was working as a heavy equipment operator while stationed at Fort Lewis in Washington, he was pulled under a piece of machinery, injuring his legs and back. Finally, in 2014, he was working at an oil-change business in Waterville when a driver accidentally lost control of her car, giving McGahuey a head injury and exacerbating the previous problems.

After that 2014 accident, McGahuey lost the ability to work or pay for housing. Since then, his family has spent long periods camping outside. They were one of the first families to apply for housing in Cabin in the Woods, and they’re now able stay there with subsidized rental costs.

Now that some stability has been reintroduced to their lives, McGahuey hopes that he can start taking classes at a community college and working again, even if it’s part time. His wife, Sheena, is unable to work and receives disability payments because of medical problems she suffered when giving birth.

“This does ease the pressure of it,” Sheena McGahuey said. “It does help.”