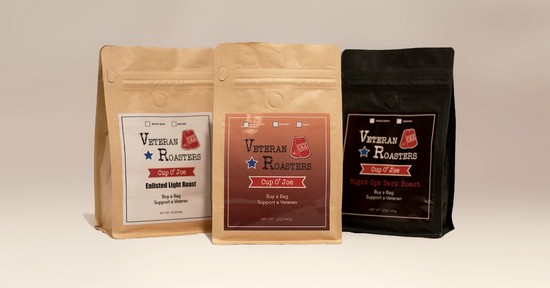 Next time you invest in your weekly coffee supply, maybe consider buying it through a company that offers homeless and at-risk Veterans an employment lifeline.

That’s the goal of Veteran Roasters, whose core mission is to hire and train Veterans for jobs in the coffee industry, through the proceeds it earns selling America’s favorite caffeinated beverage.

“Our focus is to provide opportunities to those whose transition back after their service didn’t go as they hoped or planned,” said Veteran Roasters founder Branden Marty, a Navy Vet. “It’s a neat environment because everyone has a similar experience, so you can easily connect with people.”

As Marty put it, Veterans Roasters isn’t giving Veterans "a hand out, we’re giving them a hand up.” The money they earn through coffee sales goes directly back into their charitable arm, Rags of Honor 1, which funds their ability to hire Veterans and help pay for their life needs like housing and child care.

Coffee isn’t the only beverage Marty is trying to parlay into a successful small business. Veteran Roasters recently partnered with Chicago Cubs Manager Joe Maddon to help create a new beer that they dubbed “Joe Maddon’s Try Not To Suck” German Lager.

All of the proceeds from beer sales will go toward ending Veteran homelessness and joblessness via Rags of Honor 1 and Maddon’s Respect 90 foundation, which has multiple programs designed to aid and shine a spotlight on the overall homelessness problem.

“We’re developing almost a family of brands around this whole mission and providing even more opportunities,” Marty said.

Veteran Roasters is a wholesale company that mostly sells its coffee to restaurants, hotels and those throwing corporate events — and individuals can also buy the coffee directly from the company’s website. Marty said that so far the company has been able to hire five Veterans since its inception in 2017.

It also has a direct partnership with the Chicago-based Passion House Coffee Roasters, which has been supporting Veteran Roasters’ efforts to teach down-on-their-luck Veterans about the world of coffee.

“Branden does a great job running the company,” said Passion House owner Joshua Millman. “He is very passionate and he’s a go-getter. Branden loves so much that he’s able to give at-risk or homeless Veterans this opportunity.”

Marty was never planning on starting a coffee company. He grew up listening to his grandfather’s stories about his time as a WWII pilot and decided that he wanted to join the military so he could also travel the world and serve his country.

He enlisted in the Navy in 2002 as a helicopter pilot and deployed multiple times to places like the Middle East and western Pacific. After separating in 2013 as a lieutenant commander, Marty began his post-military career as an aide to a few decorated generals.

“I got to see the world many times over,” he said. "I got to be in the room with three and four-star [generals] who were dealing with big national-security issues.”

Later, Marty landed a job at Naval Station Great Lakes as the wounded warrior program coordinator for the Midwest region. He was eventually approached to help coordinate the Warrior Games in Chicago, which is where he met fellow Veteran and small-business owner Mark Doyle.

Doyle was an ex-contractor who had worked in Afghanistan and recently launched Rags of Honor, a military-style apparel company separate from Veteran Roasters’ similarly named charitable arm. He gave Marty the idea to start his own coffee business with the goal of reducing Veteran homelessness and unemployment.

“So many Veterans deal with re-integration anxiety because no one really understands them,” he said. “We’ve created a community where all these people can come for anything.”

Millman was happy to partner with a company as singularly driven as Veteran Roasters.

“It’s really important that when people are giving their lives and committing their livelihood to allow us to live the lives that we are, that should never be unrewarded,” he said. “That is a huge, huge mission that each of these people are dedicating their lives to. And the fact they come back and aren’t taken care of … we just need to be more helpful and mindful.”

For Millman, coffee is more than just a way to stay awake during a long work day. It’s a way to bring people —particularly Veterans — together in a public space.

“It’s a conduit to start conversations, to give people a spot where they can talk to each other,” Millman said. “Maybe it’s about dreaming together about potential businesses to start or even debating. All of that happens over a cup of coffee.”

Marty recalled the “really bad-quality coffee” he was subjected to during his time in the Navy. He believes his coffee is both much better and worthy of the cause for which it is being sold.

“We think we have pretty good coffee,” he said. “You have to have good coffee to keep customers. They’ll buy the initial bag for the charity, but we hope they stay for the quality of the coffee. If you’re buying it anyway, why not support an organization that’s giving back?”