'My Own Place': 84 Homeless Vets Get 2-Year Housing in Mission Valley

'My Own Place': 84 Homeless Vets Get 2-Year Housing in Mission Valley 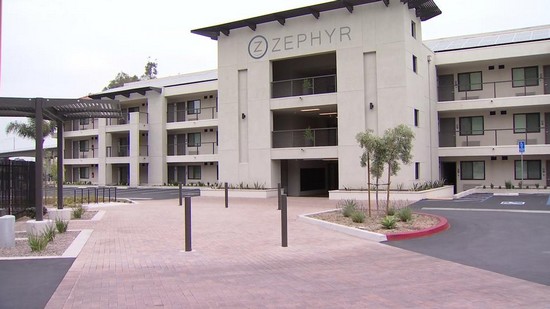 The grand opening of a permanent housing facility in Mission Valley means that dozens of homeless Veterans now have a safe place to live.

More than 80 Veterans will be housed at Zephyr, a new permanent supportive housing facility for homeless Veterans off Interstate 8 and Mission Gorge Road.

"It’s very beneficial to have someplace safe and secure," said Marine Corps Veteran Brian, who did not want to provide his last name but moved into the facility two weeks ago.

The facility was was transformed from what was once a defunct Motel 6. Now, it's a beautiful, gated apartment complex where those who served our country and fell on hard times can get the services needed to get back on their feet.

The units are low-income and Veterans will need to pay about a third of the rent, the San Diego Housing Commission pays for the rest of the rent through vouchers.

Each apartment has its own kitchen and bathroom and most importantly -- according to some of the Veterans moving in -- a door for privacy, which they don't get on the streets, or in most shelters.

"Above everything, I think it’s my privacy. The ability to walk into my own place, close the door behind me and call this place home, that’s comforting. It makes my day," said Richard, a Veteran who did not want to provide his last name.

The Veterans who live in the building are part of a two-year transitional program that aims to get them into more permanent housing. Part of the services available include on-site counselors and mental health professionals.

"This is an excellent support system that they have here, so if there’s anything that needs to be addressed – whether its mental health, physical, financial – they’re here for you and I think that’s important," Richard said.

The majority of the building's occupants, including Richard and Brian, have already moved in. The facility managers, Affirmed Housing, hope to have the rest of the residents moved in by the end of the month.

This is the third permanent supportive housing project to open in San Diego from Affirmed Housing. The development company partners with Path, a homelessness support group, to provide resources to its residents.