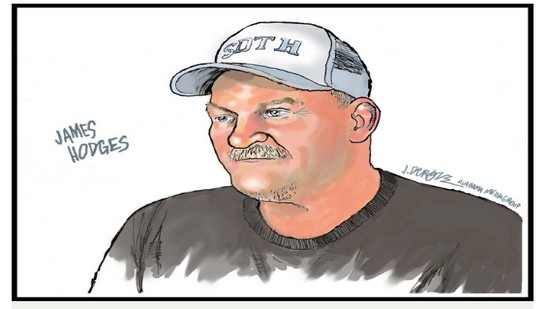 Homeless. Veteran. These two words don’t belong together. How could someone who is willing to die for our country wind up on the streets, kicked to the curb after their service? I’m on a mission to draw as many of Alabama’s homeless Veterans as possible and let them tell their stories.

In October, Reckon and AL.com videographer Amanda Khorramabadi and I, the dorky cartoonist, were invited to attend Stand Down Together in Huntsville, a 3-day event which brings homeless Veterans in off the streets for the weekend at the Jaycees Center, a large gymnasium-like facility. While there, Veterans are assigned cots to sleep on and offered services such as haircuts and dental work, food, clothing and supplies they can take with them when they leave. That is where we found today’s featured homeless Veteran.

At the time of this interview, James “Bugs” Hodges had been homeless and on the street for about 6 weeks. This is his story:

James Hodges’ father was a career military man, and his family travelled “all over the place” when he was a kid. Huntsville was home in the summers and when his father was deployed to Korea and Vietnam. James was a high school football star in Virginia with a chance to play at the college level. A soft-spoken, strong, burly man, James looks like he could still be a force on the gridiron.

“I had a choice of either Alabama or Tennessee,” he said. "I wanted to go to Alabama to play for my biggest role model, Bear Bryant. I was skinny then, and fast. From what I understand, some of my high school records still stand.”

His fate was determined in his final high school game. “It was the last game, the championship. I was running to catch a pass and I jumped - didn’t see the fence - I cleared the fence except for my knee, and it ripped open," he said. “Blew my knee out. Couldn’t get my scholarship. But I was still good enough for the military.”

"While on active duty my stomach started messing up and they said it was my gall bladder and they took it out.” His gall bladder was gone, but his stomach problems continued.

When James tried to re-enlist for the fifth time, he was turned down for medical reasons. “They more or less kicked me out,” he said.

“I’ve been trying to get disability, medical help, but they’re telling me I didn’t have enough active duty. I did 16 years, I did the weekends, we were active for a month and a half. Now they’re saying I needed at least 3 months active duty time.”

James fell through the cracks.

Things went down hill from there. James lost both his parents, his family fell apart, and he had a bad breakup with his girlfriend of six years. All of a sudden, he found himself on the streets.

Life on the street

"One day, I was late to the mission and they wouldn’t let me in. So I was out on the street all night. I went to the store to get something to drink - got robbed and beat up. Two cracked ribs. The police came. Everybody that was standing there watching said they didn’t see anything. One cop walked toward where the guy had run and found my wallet, but my bank card and ID was gone.

"Since then, I’ve made it a point to always get back to the mission by 5:00 at night. My friend put the word out on the street that he wanted to know who fried me. Every time I’m out on the street now, there’s somebody watching out for me. They know I’m not out there to mess with 'em or rip 'em off, they know I try to help people.

"I get along with everybody. I give what I can and help out. Because that’s the way I was brought up. Country boy, dad in the military. Lots of people be like “whites don’t mess with blacks.” In the military, you don’t see any color but green.

"They call me “Bugs” because of Bugs Bunny. I’m always joking around, trying to make people laugh. There’s enough sad news in the world, the way everybody does everybody. They treat homeless people like we’re a disease.

“I try to make ‘em laugh, even for 5 minutes. Maybe they’ll forget about it."

At the time of this interview, James had a job opportunity that required him to wear black shoes, which he didn’t have. One of his fellow homeless brothers at the mission heard of his need and offered him his own black shoes. They fit. Game on.