Editorial: Veterans are still homeless in Los Angeles. They shouldn’t be

Editorial: Veterans are still homeless in Los Angeles. They shouldn’t be 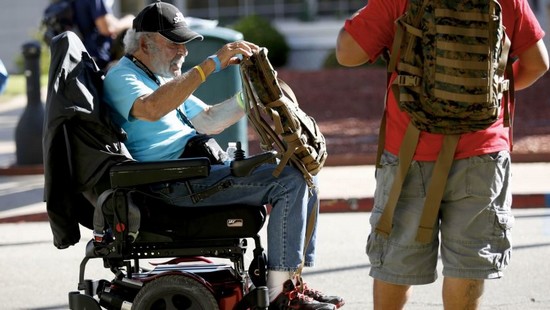 There are 3,878 Veterans who lack a “fixed, regular or adequate place to sleep” on any given night in Los Angeles County, according to the annual count of the homeless conducted in January. Like the rest of L.A. County’s homeless population, most of them live on streets and sidewalks while a smaller number find beds in shelters. About a dozen live in an encampment outside the gates of the VA’s campus in West L.A.

The fact that Veteran homelessness in Los Angeles has mostly trended downward recently is a reflection of the enormous financial resources that the federal government has put into addressing the problem — mostly through an infusion of housing subsidies known as VASH vouchers — and the efforts by local city and county officials to encourage landlords to rent to Veterans who hold those vouchers. This was all part of a national push that dates back to the Obama administration. In fact, according to the Department of Veterans Affairs, homelessness among former service members has decreased by 46% across the nation since 2010 (compared with a 13.2% decrease in general homelessness).

Still, it is slow and difficult work. In L.A., more than 2,800 homeless Veterans were housed last year. Yet their total numbers stayed flat. That’s because Veterans are becoming homeless as fast as they’re being housed.

Homeless Veterans, of course, face many of the same issues as other homeless people on the street. Housing vouchers are worth only so much, and affordable housing is scarce. Landlords are reluctant to accept vouchers from homeless people, fearing they will be problem tenants. The fact that Veterans served their country in the military doesn’t necessarily make them sympathetic figures to landlords.

But there are other issues within the VA that may be affecting how many Veterans get housed. The VA is a gargantuan bureaucracy that moves slowly. There are 4,900 Veterans across the county living in housing on VASH vouchers, according to VA officials. But the L.A. County Development Authority (one of the housing agencies that administers the voucher program) says it has 600 unallocated VASH vouchers that are going begging. (That’s in addition to people who have vouchers in hand but can’t find housing.) They’re unallocated because it is up to the VA to decide which Veterans get them, and the agency isn’t sending over referrals quickly enough, according to L.A. County Development Authority Deputy Executive Director Emilio Salas. He estimates they get five to eight referrals for vouchers a week.

Yes, Veterans have to be Vetted and approved for vouchers. But the VA should pick up the pace. Homeless Veterans shouldn’t be languishing on the streets when there are vouchers to be distributed.

And some people who have worked with homeless Veterans through the VA say the agency just doesn’t have enough case managers to handle all the Veterans who get housing — and need mental health treatment or other services to help them stay housed. Without enough help or treatment, they run the risk of not being stable enough to keep their housing.

VA Greater Los Angeles Healthcare System officials say the VA here has a personnel vacancy rate of 12.6%. The VA’s new director, Steven Braverman, says one of his primary goals is to hire more people. That would help.

The VA has its own master plan to add 1,200 units of housing to its West LA campus for homeless Veterans. It’s taken years to move that plan along. Only 54 units are open right now. Another 180 units won’t be ready until the year after next. Those are welcome, but the master plan needs to be implemented faster. Braverman wants to look into speeding things up by putting modular housing on the campus.

Meanwhile, a 100-bed bridge shelter for Veterans has been stalled for the better part of a year due to asbestos in pipes underground.

We long for the Veterans Day when we can say that the VA has eliminated Veteran homelessness in Los Angeles.