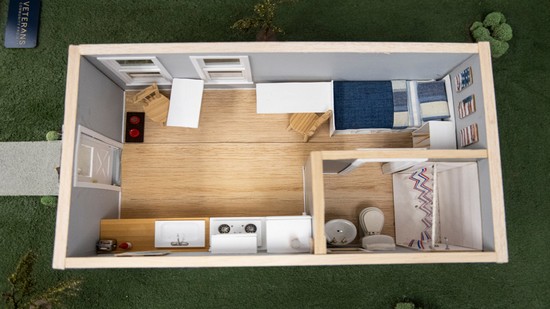 In 2011, Brandonn Mixon was discharged from service in Afghanistan after sustaining a shoulder and spinal injury. But soon after his return to the U.S., he was dealing with depression and suicidal thoughts. He felt left behind. Mixon met others like him, and, in 2015, he co-founded the Veterans Community Project (VCP) in Kansas City. The flagship offering? An innovative strategy aimed at ending homelessness among Veterans that’s inspiring similar initiatives from New York to Oregon.

America has nearly 38,000 Veterans experiencing homelessness. Many of them suffer from post-traumatic stress that makes it hard for them to adjust in traditional homeless shelters. Often, they prefer living “in the woods or on the street with other Veterans, because [they] feel safer than trying to go to sleep around people” they don’t know, says former Missouri Secretary of State Jason Kander, who works with VCP.

That’s why VCP is building a Veterans’ “village” — a community of furnished tiny homes, each 240 square feet — meant as transitional housing for former soldiers. The VCP village in Kansas City now offers 50 homes. A second VCP village is set to open in Colorado next year, and VCP is expanding to eight states by 2022, says Mixon. The idea of the village is to complement housing with the stable support network they had before they left service. At the VCP village, Veterans who previously experienced homelessness also receive job training, clinical services — and, most importantly, camaraderie.

It’s an approach that Oregon’s Operation Tiny Home is also adopting. They build tiny houses and offer workshops where Veterans learn skills such as installing windows and understanding blueprints that can help them find jobs in the construction industry. They’ve already helped build projects in Wisconsin, Texas and Arizona.

Another “Veterans village” in Bakersfield hopes to offer tiny homes — 400 square feet — in the next few weeks to Veterans who are homeless. And in Syracuse, New York, A Tiny Home for Good — a nonprofit — is building 300-square-foot homes for Veterans on open lots in the city. Again, the effort is to offer not just a home but a community, so meetings are held monthly where all residents are encouraged to attend.

The small size of these houses — across these initiatives — makes them affordable to build for organizations like VCP, Operation Tiny Home and A Tiny Home for Good. It also helps create housing of a size that Veterans are used to.

“Some folks are not ready for independent living in an apartment … In a tiny home, you are replicating the position they were in while in the service, when they were last stable,” says Kander. “It is a good transitional introduction back into housing.”

These groups typically operate as a free service or for a small price. The VCP program is designed to have Veterans stay in the tiny homes for about six months before they find more permanent accommodation. But those who need to stay longer can. Others like Operation Tiny Home and A Tiny Home for Good are designed as permanent housing for Veterans: They can rent the homes for $300 a month or pay 30 percent of their wages if they are on a fixed income.

The idea behind such projects, says Andrew Lunetta, executive director of A Tiny Home for Good, is to provide not just affordable housing for Veterans, but homes that help bring stability to their lives. “What’s out there right now that is affordable is garbage, bad roommate situations, bedbugs and code violations,” he says. “It’s not an environment for long-term stability.”

The skills training part of these initiatives is equally important, say experts, in helping Veterans find jobs in today’s marketplace. A study from Duke University’s Fuqua School of Business found that hiring managers often typecast Veterans as “unfeeling” and so worry about recruiting them for jobs needing interpersonal communication.

All of this makes these tiny home communities for Veterans an “innovative way” to address homelessness among former soldiers while also offering them the services they need, says Hunter Kurtz, assistant secretary for Public and Indian Housing within the Department of Housing and Urban Development.

It isn’t easy for these groups to build tiny homes though. Several cities across the U.S. have zoning laws that favor family-size housing instead of smaller, single units. Building a full community is even harder. For example, in 2016 police seized a tiny home community for those who were homeless in Los Angeles over health and security concerns aired by others in the neighborhood. It was, however, ultimately returned.

Still, this model offers a rare fix for a problem that local and federal governments have long struggled to adequately address. It’s little surprise then that communities nationwide are reaching out to VCP about their model and their expansion plans, says Mixon.

That might not seem much, but if these initiatives show greater success as they scale up, that small dip could turn into a sharp drop. And America might move one step closer to keeping its Veterans off the streets.