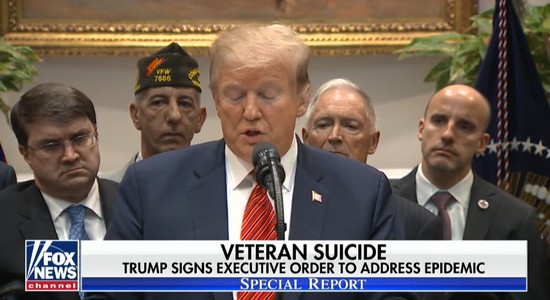 President Trump signed a new executive order on Tuesday aimed at decreasing the number of Veteran suicides and creating a task force of state and local groups to raise awareness of the crisis.

Currently, about 20 Veterans die by suicide every day - a rate 1.5 times higher than those who have not served in the military. During a meeting in the Roosevelt Room of the White House, Trump urged an expansion of outreach programs by awarding grants to different community programs combatting the issue.

"Veterans' suicide is a tragedy of staggering proportions," Trump said at the signing ceremony, while surrounded by military families and Veterans' organizations. "Today we can help end this crisis."

Trump added that the high Veterans' suicide rate can be solved only if the entire country works together to build communities supporting and protecting Veterans from the moment they return from service to civilian life.

"They courageously fulfill their duties to our nation, now we must fulfill our duties to them," Trump continued.

His new order is being dubbed the PREVENTS initiative, an acronym that stands for "President's Roadmap to Empower Veterans and End a National Tragedy of Suicide."

The White House said the new task force created by the executive order will create a grant system similar to the Housing and Urban Development VA Supportive Housing program, which provides funding for state and local programs that help Veterans and their families experiencing homelessness find permanent housing.

The White House, however, has not indicated the expected costs for the proposed grants with the PREVENTS initiative, which would have to be approved by Congress.

The executive order comes after a report by the Government Accountability Office last December that revealed the U.S. Department of Veteran Affairs had only spent $57,000 of the $6.2 million available for paid media, which could have gone towards suicide prevention efforts.