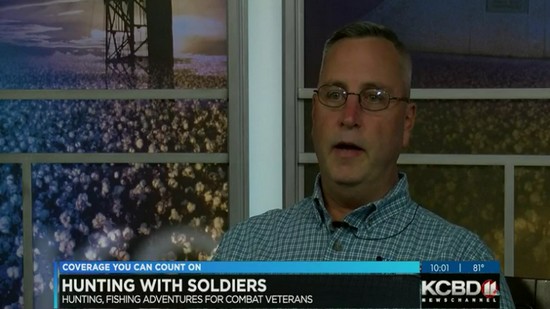 Hunting with soldiers is a non-profit organization made up of volunteer staff who take Veterans on hunting and fishing adventures across the state.

After 9/11, Gordon Melton wanted to do something for Veterans.

“22 combats Veterans a day commit suicide and that is 22 too many,” Melton said.

Melton, an air force Veteran himself, did not know what to do until years later, after a traumatic experience as a firefighter.

“It affected me to the point where I just had to get out of the house the next day and I went to the deer stand and I just sat there. I didn’t even have a gun, I didn’t have anything,” Melton said.

That is when the idea came to him. He wanted other Veterans to experience the peace he did from nature.

Veterans will spend anywhere from two to five nights fishing and hunting with other Veterans.

“They might not have been in the same firefight, but they were in similar situations, so they know this person they’re talking to understands them,” Melton said.

You might be wondering, wouldn’t hunting be a trigger for a combat Veteran? Well, Melton said he is asked that a lot.

“That animal that they’re harvesting does not shoot back at them for one thing, and it gives them the satisfaction that they’re able to bring meat home to they’re family,” Melton said.

On these trips, Veterans are housed, fed and provided with hunting or fishing gear, and they do not have to pay a thing.

“The only paycheck they give us is a handshake, and often times there’s a hug and some tears,” Melton said.