Each of us has a role in preventing Veteran suicide

Each of us has a role in preventing Veteran suicide 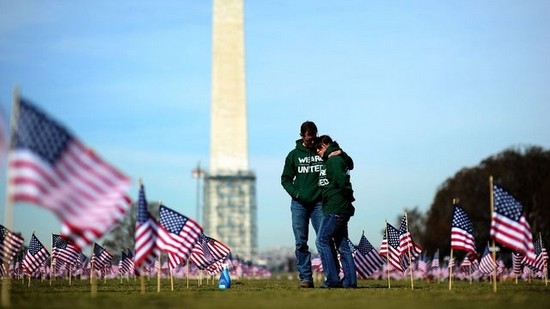 Each year, more than 6,000 American Veterans take their own lives. These include some of the bravest, most dedicated men and women this nation has ever produced. Soldiers, sailors, airmen and Marines who put their own lives on the line to protect all of ours, find at some point that they cannot go on.

This is a tragedy. And it’s one all Americans can and must personally do more to help prevent.

This starts at the individual level, and it starts with paying attention. A person who is struggling emotionally and possibly considering suicide often will show signs of agitation, despondency, or increased use of alcohol or drugs, for example. Mental health experts say these signs may not be obvious or frequent, but when a Veteran is a friend, family member or coworker, you may see changes over time that highlight tougher periods in their lives.

If you see these signs, please don’t dismiss them. Studies show that not everyone who talks about feeling trapped or hopeless will die by suicide, but most people who die by suicide do exhibit warning signs — whatever they are experiencing may not be something they’re capable of working through on their own. That’s why experts tell us that reaching out to ask how someone is doing, finding out more and trying to be there for them is so important.

Sometimes, just letting someone who is struggling know they don’t have to walk alone is the best first step. The Veterans Administration (VA) has a national awareness campaign called #BeThere, which also provides tips on how to help. This includes referring a Veteran to trained professionals for assistance: Coaching into Care, the National Suicide Prevention Lifeline (1-800-273-8255) and the Veteran Crisis Line are three excellent resources capable of doing so.

Please don’t assume that Veterans are only dealing with combat-related issues, either. One Army sergeant, for example, nearly took his own life not because he was suffering from post-traumatic stress disorder (PTSD), but because he was worried about being able to financially support his family, among other factors. With two sick children and $100,000 in debt, this individual contemplated suicide as a means of generating a life insurance payout to support his loved ones. Fortunately, in this case, someone took notice of his behavior and got him help.

In other cases, these signs will be harder to spot, especially among military Veterans who internalize their suffering and suppress outward displays of struggles that may drive them to hurt themselves. Another former staff sergeant who served with distinction, who never displayed any signs of distress, still attempted to take their own life. Internal conflicts can be challenging to see from a single vantage point, which is why we all must be alert to changes in behaviors.

We must do more to identify those Veterans who are struggling to cope, enhancing human observation with technology that picks up indicators our own eyes and ears may miss. Enabling rapid information-sharing that protects the privacy of the individual, while still enabling a composite picture for those seeking to assist them, is critical.

It’s also critical that we encourage Veterans to take advantage of the resources available to them. The VA has prioritized providing mental health services to the people who need them, but too many Veterans aren’t reaching out. Of the 20 Veterans who die by suicide each day, 14 haven’t sought help from the VA or waited until they were in crisis, according to Dr. Keita Franklin, who served as the VA’s national director for suicide prevention.

Many stressors fall into predictable patterns of increased risk, and now more than ever we have the tools to highlight those patterns and stop tragedy before it strikes. Just as we don’t hesitate to celebrate our Veterans or thank them for their service, we can’t hesitate to put that plan into action if there are ways to reduce the tragedy that is Veteran suicide.

We must support and serve our Veterans with the same care and devotion they have demonstrated in serving us — as the Marine Corps would say, “Semper Fidelis,” always faithful — always and every day making it our mission to support them overseas and here at home.

If you or someone you know needs help, contact the Veteran Crisis Line 24/7 at 1-800-273-8255 (select option 1 for a VA staff member). Veterans, service members or their families also can text 838255 or visit Veteranscrisisline.net.

Gen. James L. Jones is chairman of the Atlantic Council and is the former national security adviser to President Barack Obama. He retired from the Marine Corps in 2007 after 40 years, during which he served as commander of the U.S. European Command, Supreme Allied Commander Europe, and Marine Corps commandant.