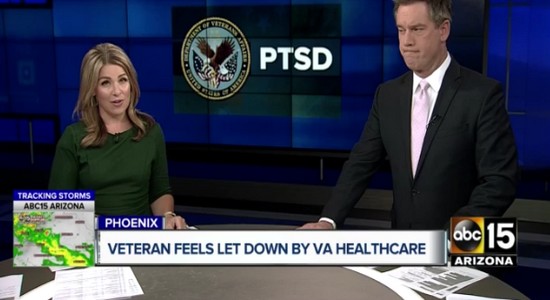 PHOENIX — When it comes to treatment for post-traumatic stress disorder or PTSD, the U.S. Department of Veteran's Affairs consider themselves among the best. Those involved in the program here in Phoenix tell us, the Valley is nationally renowned for the PTSD care they offer Veterans.

At the Phoenix VA, the post-traumatic stress disorder clinical team works with Veterans and service members who have experienced traumatic events in their lives.

According to statistics ABC15 has obtained from the U.S. Department of Veteran's Affairs, the Veteran suicide rate in Arizona was significantly higher than the overall national suicide rates. The mental health call center at the Phoenix VA healthcare system reports handling 40,000 calls in 2018. Staff credit their team for helping save dozens of lives.

With so much passion and dedication put towards mental health resources in the community, Phoenix VA staff said they were surprised to hear the story of a Veteran who reached out to ABC15, saying he was disappointed with how he had been treated when he tried to seek help for PTSD.

Brent Phillips is a marine corporal who medically retired after getting injured in Iraq. Phillips was part of task force Scorpion and entered Iraq in 2003 with the first wave of marines in the country. The injuries he suffered during an ambush while moving through Iraq cost him an eye and earned him a Purple Heart, a military decoration awarded in the name of the President to those wounded or killed while serving on or after 1917.

Phillips said his team was 'moving fast' up north through Iraq, and were conducting a mission at a water treatment facility. On his way out, Phillips and his unit were fired upon by insurgents. Phillips said he was hit by four rocket-propelled grenades or RPG's.

Phillis said he was stuck in the vehicle and remembered all four explosions. He was eventually able to climb out and get on top of the vehicle, where he "engaged the enemy." Phillips said he could barely see anything due to his injuries, and used a blinking technique he was taught when sprayed with tear gas during training to fight back.

"I engaged the enemy until I was completely blinded due to the blast injuries to my face," said Phillips.

He was flown to Germany for treatment. The military flew his family there to be by his bedside. After recovering, Phillips said his doctors were able to get an "FDA compassion waiver" to perform experimental surgery on his eye.

He blamed follow up care at the VA for the surgery ultimately not working, but what Phillips wanted to discuss more than the eye he lost was the PTSD he lived with for years before he worked up the courage to ask for help.

"I thought I could handle it on my own," said Phillips.

He described the slightest sound or sight as triggering flashbacks or memories that reminded him of his ambush, or the sights he saw in Iraq.

Phillips described driving into a desolate part of Scottsdale one night, where the lights hitting the road reminded him of a place he had been to in Iraq.

"I would grip the steering wheel, instantly start smelling the sulfur. I could hear some of the noises. I've heard of amputees explaining ghost pain, and I would feel things like where the shrapnel went in, where I had the cuts," explained Phillips.

He finally decided to seek help.

He said the hardest part about opening up about his experiences initially was talking about them with someone who had never been deployed. He didn't know if he would be judged.

Phillips said he started and stopped treatment a few times, and each time there was a new counselor, he had to open up to all over again.

At one point, Phillips said the only thing he discussed with his counselor during their sessions was if the medication was working. He called those visits "medication check-ups."

The last time Phillips said he went to the VA for treatment, he was told he would have to see someone in another state.

"During the appointment process I was told that my doctor had left and due to a shortage of counselors in the VA system, my doctor was going to be out of Los Angeles," said Phillips.

He was upset but decided to show up for the appointment.

"The whole time this is going on, I'm like why am I here. Why am I opening up to a TV monitor?" Phillips said he walked out mid-appointment and never went back again.

ABC15 asked Phillips if he had reached out to supervisors of the PTSD clinic or management at the VA to let them know his concerns. He said he had not.

Phillips said he felt telehealth type programs might be good for some people, but it did not work for him.

Dr. Brandi Luedtke, a clinical psychologist, and PTSD clinic program manager acknowledged it was a big deal for a Veteran to come in and open up about their experiences.

"It does take a lot of courage to come into our clinic and share some of those experiences," said Luedtke.

She explained that the Phoenix VA had been offering telehealth in the PTSD clinic since 2010, and the program worked really well for those Veterans who lived in rural areas, so they did not have to drive 2-3 hours just for an appointment with a counselor.

Dr. Luedtke expressed surprise at this Veteran's story and said she hoped to hear from him again.

"I would have loved to have clarified how this route happened and make sure that we get him hooked up with services. We do know how difficult it is. If one treatment program is not working, we always encourage the Veteran, please share with us if the symptoms are worse or you don't feel like this is a good fit," said Luedtke.

Dr. Kris Kratz with the Phoenix VA psychology department said he planned to look up the Veteran's patient file and look into his concerns.

"Any concern like that is something incredibly important for us to be aware of and to be able to address it at an individual level with that Veteran," said Kratz.

"Mental health at the Phoenix VA is committed to providing exceptional healthcare and positive Veteran experience. If neither of those two things is met it's important for us to address that, look into their record, and make any corrections if there are corrections that need to be made," he added.

Dr. Kratz said counselors at the VA are handling about thirty patients a week. Some of them are in for assessments, others in for treatment. Kratz acknowledged that it was a heavy workload.

"We certainly can continue to add more staff. That is probably true for all the services given our growth rate," Kratz said.

Numbers ABC15 has obtained from the U.S. Department of Veteran's Affairs show the Phoenix VA eligibility office averaging 270 new enrollees per week, with a high of 390 in a week. 2018 was a record-setting year in Phoenix with more than 95,000 new unique Veterans enrolled in the program.

A spokeswoman for the VA provided ABC15 with the following statement:

"Because of privacy laws, we can’t share anything specific to this Veteran’s care. However, as we mentioned on Friday, we have a team of providers who have dedicated their lives to care for Veterans. In this case, one of those providers is reaching out to this Veteran so that they can collaboratively find the right treatment for him."

VA officials said the average wait time for a Veteran who is seeking help for PTSD is about two weeks right now. Those in crisis can use same day services in mental health during regular business hours in person, via phone, or through MyHealthVet secure messaging.

The VA also has a "Be Connected" program that offers 24/7 support. You can get more information at https://www.beconnectedaz.org or call 1-866-4AZ-VETS.

Those in crisis can also call the Veteran's crisis line 24 hours a day, seven days a week. That number is 1-800-273-8255. Press one to talk to a counselor. You can also chat with a counselor at Veteranscrisisline.net or text them at 838255.