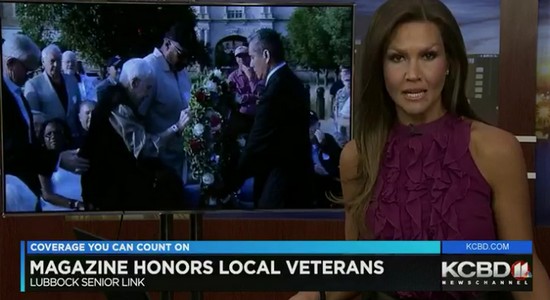 LUBBOCK, Texas (KCBD) - From Afghanistan and the Gulf War to World War II and the Korean War, Veterans of these conflicts gathered Friday at Texas Tech University’s Memorial Circle for a monumental photograph and to honor the heroes we’ve lost.

The Veterans will be on the cover of the Fall Edition of Lubbock Senior Link Magazine with their stories inside for future generations to enjoy, study and remember the sacrifices that were made for our country’s freedom.

“Every Fall Edition we really focus on World War II and Korean Veterans that are local in this city,” Owner/Publisher Erin Agee said. “So far, since 2014, we have recorded more than 200 Veterans’ stories. We want to get as many stories as we can preserved. We don’t turn down a WWII or Korean Veteran’s story. We want the younger generations to have those to look back on.”

Agee said they chose to hold a wreath laying ceremony and take the cover photo at Memorial Circle to help educate the public about the significance of the memorial, which was built in 1948 for World War II Veterans. Around 30 Veterans were present to participate, the oldest at 105 years old.

“In a time when our country is really trying to define what our patriotism looks like, I feel like it’s important to bring them together to let them know, ‘Thank you. We appreciate you. We honor you. We see the sacrifices that you’ve done for our country.’,” Agee said. “And, to let the younger generations know and see these people and realize they fought for our us and we need to come alongside them and continue to honor the country they fought for.”

This year three local high school students, two from Christ the King Cathedral School and one from Talkington School for Young Women Leaders, were chosen to include profiles of their friends and family in the magazine.

“It’s really an amazing experience to write a piece of literature and see it in a magazine, somewhere a lot of other people can see your writing and see it out there for the world,” Lukas Moreno said. “It’s very inspiring and humbling too. On top of that, it’s about people who we need to recognize more often in our lives, the Veterans who served our country.”

“I have a lot of respect, I can’t really put it into any other words,” Stephan DeLuna said. “Honestly, I feel really proud that I’m able to contribute to that a little bit.”

Gulf War Army Veteran Elroy Carson was one of two Veterans Friday to escort the wreath to its place next to the Memorial Circle monument. He said he appreciates the solemn opportunity.

“It’s difficult all the time when you are away from your brothers and sisters to remember why you gave as much as you gave,” Carson said. “It’s at times like this when you have time to get back with them and it reminds you that in order for us to continue the freedoms and opportunities we have in our country, someone has to make sure that opportunity remains available. It feels good to be here.”

Carson said he was taught about the greatness of the United States by hearing the stories of his uncles who served. He said it’s vital for those stories to continue to be told.

“Stories, comments, pictures of those warriors who are making sure that freedom continues to exists are instrumental in developing and coaching our younger generation,” Carson said.