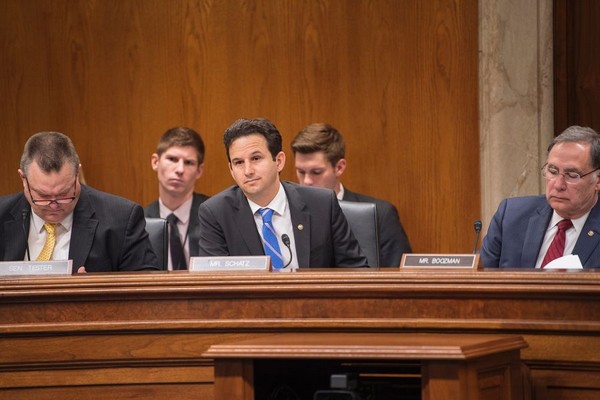 WASHINGTON — The ongoing fight between members of Congress and the Department of Veterans Affairs continued Wednesday when 12 senators criticized the agency for failing to give them even basic information while VA officials declared they were “providing unprecedented transparency.”

The 12 senators — 11 Democrats and one Independent — sent 24 questions to VA Secretary Robert Wilkie about his proposed rules stipulating when Veterans will be allowed to receive private-sector medical treatment – changes that he said would revolutionize the VA health care system. The senators complained Wilkie released the rules last week “before engaging in meaningful consultation with Congress” and Veterans organizations.

Under the VA’s draft rules, Veterans who must drive more than 30 minutes to reach their VA mental health or primary care providers — or wait longer than 20 days for an appointment — would be allowed to use a private doctor.

“Once briefed, we were disappointed that VA couldn’t provide basic information on how the proposed wait and drive-time standards would affect the department, the Veterans who rely on it for care, and the American taxpayer,” the senators wrote.

They asked Wilkie for his reasoning behind the rules, including the data that he used and any input from private entities. They also wanted to know cost estimates and budget plans, as well as how many more Veterans would be eligible to receive private-sector care under the new rules and whether the VA would need to hire more staff to schedule appointments with private doctors.

Previous pleas to receive the information have been “met with silence,” the senators wrote. On Monday, Republican and Democratic leaders of the Veterans affairs and appropriations committees sent an initial letter to Wilkie urging him for a more collaborative relationship with Congress.

Last week, some lawmakers and Veterans organizations expressed worries the rules could expand Veterans’ care too far into the private sector and erode VA resources. The senators wrote Wednesday that the VA has shown “apparent indifference” about their concerns.

In its statement Wednesday, the VA listed the number of congressional hearings, roundtables and briefings it participated in during fiscal year 2018. The agency conducted 1,302 congressional briefings, a 66 percent increase over the previous year, according to the statement.

But as early as December, lawmakers have criticized the lack of substance at those briefings. Sen. John Boozman, R-Ark., told Wilkie at a public hearing Dec. 19 that the VA gave various congressional staff members different sets of information about the proposed private-sector care rules. Boozman is chairman of the Senate appropriations subcommittee that handles VA funding.

Sens. Brian Schatz, D-Hawaii, and Jon Tester, D-Mont., brought up the lack of transparency Tuesday during a meeting of the appropriations subcommittee.

“I want to express my frustration and disappointment with how the VA has engaged Congress on its proposed access standards for the new community care program,” Schatz said. “Members of the majority and minority, authorizers and appropriators, have made repeated requests to hear from the VA about what information the VA relied on to inform its decision-making, and it’s budgetary implications.”

Tester said Congress needed more information about the access standards in order to fulfill its role of oversight.

The senators asked for written responses from the VA by Feb. 22.

In the meantime, the senators said the lack of information is worrisome.

"We believe there is reason for alarm," they wrote.

The VA plans to post the proposed rules to the Federal Register, where members of the public will be allowed to provide input. Under the law, the new rules for private-sector care must be finalized in March.