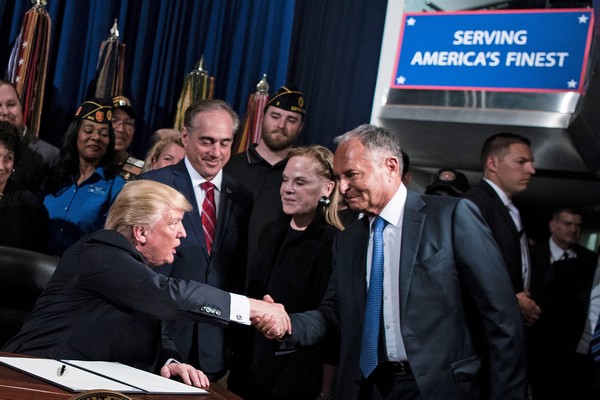 Three men "ostensibly used their wealth and connections to President Trump and his family to make decisions" for the VA, according to Rep. Mark Takano.

The chairman of the House Veterans’ Affairs Committee announced his intention to open an investigation in how three men "ostensibly used their wealth and connections to President Trump and his family to make decisions" for the Department of Veterans Affairs, according to a letter he sent to the agency on Friday.

The three men allegedly formed an informal council that oversaw sweeping changes of the Department of Veterans Affairs, according to an August 2018 Pro Publica report.

“The Committee on Veterans’ Affairs is opening an investigation into this relationship so that Congress, Veterans, and the American people can better understand the scope and nature of this relationship between the Department and these individuals who have not served in the U.S. military nor U.S. government, and are not accountable to Veterans and the American people,” Takano wrote in the letter.

Released Friday, the letter also outlined 20 different requests for documentation of interactions between the three men and VA officials.

They said they were simply asked by Trump, former VA Secretary David Shulkin and the secretary's senior staff to weigh in on the agency's services and assumed that VA officials would make their own judgments.

"Our only goal was to help improve Veterans care," the men said in the statement provided through a public relations firm. "We didn’t seek or receive any personal or financial gain. We never imagined that volunteering our personal time to improving Veterans’ healthcare would open us up to criticism. In hindsight, it is clear we underestimated the coarseness of an environment in which even well-intentioned efforts can be twisted to fit pre-conceived narratives."

The White House did not respond to a request for comment.

Curt Cashour, press secretary for the department of Veterans Affairs, said in an email that the agency had been “transparent on its communications with these three individuals,” noting that VA officials had responded to numerous requests filed under the Freedom of Information Act that they later shared with Congress.

“Although his predecessors may have done things differently, Sec. Wilkie has been clear about how he does business. No one from outside the administration dictates VA policies or decisions – that's up to Sec. Wilkie and President Trump. Period,” Cashour wrote.

He then referred further requests for comment to previous VA leaders and later sent an excerpt from a Friday Wall Street Journal article that asserted that former VA Secretary David Shulkin had created private email accounts to correspond with the three men.

Cashour previously worked for Shulkin, who did not respond to a request for comment.

Investigating any untoward influence that the three men may have had was a priority for Takano and the Democrats as they took control of the committee. The information gathered is expected to inform whether they call a committee hearing and use their subpoena powers to compel current and former officials as well as the three men to testify.

“It’s important for the chairman for this to be a methodical process, that it is fair, that it is bipartisan to the largest extent possible,” said Miguel Salazar, the committee’s spokesman.

But Republicans on the traditionally bipartisan committee did not appear to be happy with the decision.

Rep. Phil Roe, R-Tenn., the ranking member of the committee, said his focus would be on Veterans’ services and implementing the bills passed in the last Congress.

"It is imperative we spend our time overseeing these laws, delivering on our promises to Veterans, and conducting investigations that will improve the quality of care and benefits provided by the department,” Roe said. “I do not believe that our limited time is well spent wading into areas that do not further those objectives.”