Vets rarely get college credit for military training. Here’s how Congress is trying to fix that

Vets rarely get college credit for military training. Here’s how Congress is trying to fix that 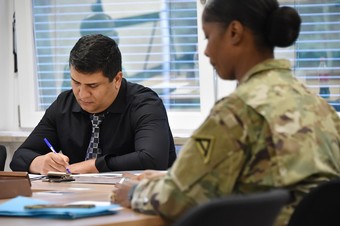 WASHINGTON — Few student Veterans receive academic credit for the training they received in the military, a problem that forces them to waste time and effort repeating work, Vet advocates say.

Now, a pair of senators are working across the aisle to fix that, by expanding Veteran education benefits to include more proficiency exam fees and other costs related to documenting skills learned in uniform.

The new Military Learning for Credit Act — introduced Thursday by Sens. Chris Coons, D-Del., and Joni Ernst, R-Iowa — would allow Veterans to use up to $500 to cover the costs of tests such as the College Level Examination Program, Dantes Subject Standardized Test Program and ACT National Career Readiness Certificate, among others.

If Veterans show proficiency on those tests, they can earn academic credit, which could help them graduate more quickly.

“Our Veterans receive intense and thorough training as servicemembers, often during the years when other Americans are attending college,” Coons said in a statement. “The least we can do is ensure that once they enroll in college, Veterans have every opportunity to translate their military training into college credit.”

According to research from Student Veterans of America, only about 36 percent of Veterans enrolled in higher education received any credit for their military training. Of those, the median number of credits awarded was three, the equivalent of a single college class.

The senators believe that making it easier for student Veterans to test out of classes could save time, money, and frustration for those transitioning troops.

In addition, the measure includes a provision allowing those Veterans to use federal education stipends for “portfolio assessments” presented to colleges as proof of existing experience worth academic credit.

Although not every institution accepts those assessments, the senators argue that allowing Veterans more resources to develop those skills review packages could help change perceptions among many school leaders about the value of military training and skills in the academic world.

No timetable has been set for when the legislation may be considered by a Senate committee. Senators began a two-week summer recess on Wednesday but will return to town to resume legislative business on Aug. 15.