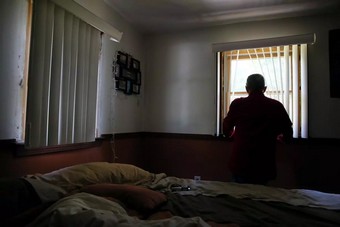 LONDONDERRY, N.H. — Homebound with diabetes, heart disease, and other ailments, the 68-year-old Army Veteran finally found a lifeline three months ago from a private home health provider recommended by the Department of Veterans Affairs.

Suddenly, he could go to doctor’s appointments, shopping, and routine outings like a haircut.

Then on Friday, the Veteran was on his own again. The health care provider discontinued its services for Ron and 15 other New Hampshire Veterans who are housebound or cannot venture outside without assistance.

The reason? The VA had failed to pay nearly $60,000 in bills dating to late last year, according to Janet and Rich Sullivan, the providers and co-owners of Right at Home.

Such a sum would seem trivial for a multibillion-dollar agency that serves millions of Veterans. But its make-or-break impact on a small New Hampshire business — and the ailing Veterans who rely on it — provides yet another example of the VA’s continuing dysfunction.

The sudden change left company officials and Veterans advocates shaking their heads, and Veterans like Ron anxious about their future.

“I’m concerned that I will end up right where I was in a few months, in total depression,” he said, adding that Right at Home has been “a lifesaver to me.”

“I don’t want to be that depressed ever again,” said the man, who did not want to identify himself because he feared retribution from the VA.

The Sullivans said that for months no one at the VA had been able to tell them when, or if, they would be paid.

“We’ve been forced to do something we don’t want to do because of the system’s incompetence and inefficiency,” Rich Sullivan said at the company’s office in Londonderry. “We can’t understand how they can all sit there silent and let this happen.”

Although all the Veterans served by Right at Home have quickly been offered care by other providers, the Sullivans expressed dismay that they could not continue helping them because of the outstanding bills.

“It’s been incredibly disheartening,” said Janet Sullivan, whose company has provided care for Veterans and others for a decade. “This is something that these Veterans are entitled to. These people are selfless.”

VA officials said Monday they will reimburse the Sullivans as soon as claims with incomplete information are resubmitted correctly, particularly claims that had included only partial Social Security numbers.

But the Sullivans said such claims had been accepted for a decade with just the last four digits of Social Security numbers — an important privacy protection — and that the company received only a voicemail in late June that full numbers would be required beginning July 1.

No one from the VA spoke to them directly, Janet Sullivan said, and no formal written notification of the change was received. Besides, she added, the Social Security-related denials represented only part of the VA’s unpaid bills.

The sprawling agency, the second-largest in the federal government, has faced repeated criticism for delayed payments to contracted companies and individuals. The concerns raised by the Sullivans — no answers to questions, long waits on hold, confusion even among VA officials about the agency’s payment system — have been voiced by a wide range of critics from Veterans to lawmakers.

“This story of health care givers dropping out because the VA doesn’t pay its bills is common,” said Anthony Hardie, director of Veterans for Common Sense, a national advocacy group. “It’s hard to fault the company. It seems like there’s more interest in shuffling deck chairs at the VA than ensuring that the health care needs of these 16 Veterans are met.”

The ouster in March of embattled VA Secretary David Shulkin plus a recent report that agency decisions are being influenced by Mar-a-Lago friends of President Trump’s have added to the perception that the department is in chaos.

In January, Shulkin directed the agency to process provider claims much quicker, aiming to increase payments to vendors by 300 percent by the end of that month and 600 percent by April. The goal was to process 90 percent of “clean” claims, or those submitted with complete information, in less than 30 days.

The VA has increased support to process claims from 140,000 a month in January to more than 700,000 in July, said Steve Piork, an agency spokesman.

But according to the Sullivans, the VA has failed miserably in their case. After contributing $20,000 of their personal funds to reduce the shortfall, the couple said, they had no choice but to drop the Veterans.

Rich Sullivan said they began noticing unpaid bills in February that dated back to the last quarter of 2017. The delay came as a surprise because they had always received timely payments, the Sullivans said.

But as the unpaid bills continued to mount, and only about 10 percent of the balance was paid each month, they began asking questions and warning the VA that they could not serve the Veterans indefinitely.

They almost never received a satisfactory response, according to the couple. Instead, Rich Sullivan said, they heard “crickets” from the VA.

Along the way, the couple said, an increasing number of claims became lost in the VA pipeline, dozens were returned because of new rules that had not been shared with them, and no one at the Manchester, N.H., and Boston offices of the VA seemed to know the status of their claims after they had been sent elsewhere for final processing.

The Sullivans described the regional VA officials as concerned and responsive but said those administrators often were hard-pressed to track claims once they went to processing mega-centers in Tampa and Austin, Tex.

“This is a systemic problem,” Janet Sullivan said. “I’ve learned things about the process that people in Manchester and Boston didn’t know.”

The Sullivans informed their caregivers in a letter Monday of the decision to halt service.

“After giving the VA ample notice that we cannot continue this practice, we are now forced to temporarily discontinue services to the Manchester VA Veterans until the balance is paid in full and we receive assurances that timely payments will follow in the future,” they wrote.

Kuster noted that Wilkie has said “the health and survival of the VA system is based on its ability to pay community providers what they are rightfully owed.”