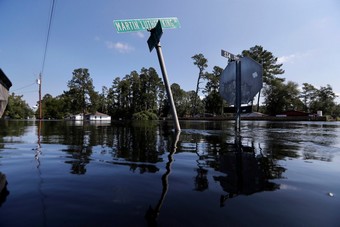 WASHINGTON — Veterans Affairs officials will accelerate appeals claim processing for individuals affected by the recent hurricanes that lashed the southeastern United States, calling it another way to help those Veterans in need.

The move will affect any Veterans in Florida, North Carolina, South Carolina and Georgia who live in counties declared disaster areas by the Federal Emergency Management Agency. VA officials did not say how many of the more than 300,000 pending appeals currently in the system will be included in the new push.

In a statement, VA Secretary Robert Wilkie said speeding up the claims process “for those Veterans and their families affected by hurricanes Florence and Michael is the right thing to do.”

At least 53 people were killed as Hurricane Florence hit the eastern seaboard in early September. A month later, Hurricane Michael made landfall and resulted in at least 50 deaths across several states.

VA health and benefits services in those areas were temporarily disrupted by the powerful storms, but officials have largely returned to normal operations in the weeks since. At the height of the hurricanes, some infirm Veterans were evacuated to facilities in different states while VA contracted with local doctors and pharmacies to handle other critical needs.

Veterans eligible for the faster appeals processing will not have to take any action to accelerate their claims. Board of Veterans’ Appeals officials said they will move ahead any cases with addresses in the affected region, and continue to fast-track those claims for the next six months.

The backlog of appeals claims has been a recurring complaint from lawmakers and Veterans advocates in recent years. Cases typically take several years to wind through the system, with some topping five years or more.

After congressional intervention, VA officials introduced a new Rapid Appeals Modernization Program with wait times under three months for case completion. But many Veterans have been slow to embrace that option, leaving their cases to wind through the traditional process.

A list of counties affected by the new announcement is available at the Board of Veterans Appeals’ web site.