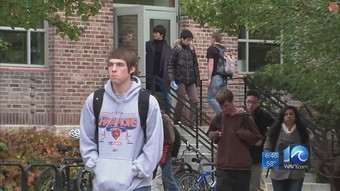 WASHINGTON (NEXSTAR) -- Some Veterans aren't getting their education and housing benefits and Congress wants to know why. A House committee says it will hold a hearing, after the election, and Veterans’ advocates say the VA needs to be held accountable.

The American Legion says some student Veterans are facing eviction because the VA is behind on GI Bill payments.

John Kamin with the American Legion says some monthly housing payments for student Veterans have been delayed up to 90 days.

“Left moving back in with their parents or couch surfing because the VA was not able to honor these Veterans and their service,” said Kamin.

On top of that, he says some schools won't let Veterans graduate or register for classes, because their tuition is late.

The VA acknowledges it's behind on the payments. In a statement, a spokesperson told us VA employees are working overtime to process the claims, and it has brought on 200 additional people to speed up the process.

“It's not enough. Absolutely not. We're beyond the point where we can take their word for it. we need to see executive action. Why has the secretary not spoken up about this?” asked Kamin.

The VA faced similar problems in 2009 but issued emergency payments to Veterans.

Congressman Jim Banks, serves on the Veterans Affairs committee. He says the VA needs a technology overhaul to keep up with the payments and other services.

“We'll get to the bottom of the matter. We'll do everything we can to see that it's fixed,” said Banks.

Kamin argues the VA knew its technology needed an update.

“The VA did not take it to be a serious problem and that's why we're where we are…Vets are left trying to figure out how to live their lives,” said Kamin.

Banks vows to hold the VA accountable but Kamin is skeptical, and already worried about payments for the upcoming spring semester.

The House Veterans Affairs Committee hearing looking into the issue is set for Nov. 14.

The VA says Veterans who aren't receiving their payments and need help to call its customer service number: 888-442-4551.

The American Legion also urges Veterans who are struggling to contact their offices.