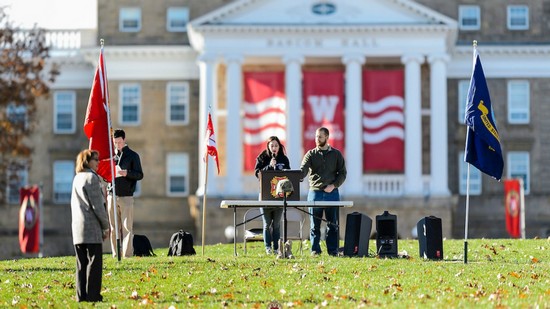 "This is — to be kind — a train wreck,” said Rep. Phil Roe, R-Tenn., the chairman of the House Committee on Veterans Affairs.

Shelley Roundtree departed the U.S. Army in 2013 after seeing friends and fellow soldiers die in combat during his tour in Afghanistan. He was committed to transitioning to civilian life, and one of his first steps was to enroll in college with tuition and housing benefits he'd earned under the GI Bill.

Roundtree, 29, began studying marketing at Berkeley College in Midtown Manhattan. He dreams of working in the fashion industry, and he's close to graduating — but now there's a serious obstacle.

The Department of Veterans Affairs is suffering from a series of information technology glitches that has caused GI Bill benefit payments covering education and housing to be delayed or — in the case of Roundtree — never be delivered.

"I’m about to lose everything that I own and become homeless," Roundtree said. "I don’t want to be that Veteran on the street begging for change because I haven’t received what I was promised."

Without the GI Bill's housing stipend, Roundtree was kicked out of his apartment and is now living on his sister's couch, miles from school, where he feels like a burden on his family. The new living situation required him to move all his belongings into a storage container, which he can no longer afford. Now all of his possessions are in danger of being auctioned off by the storage facility.

Roundtree said that because of his extremely strained finances, he is forced to choose between spending money on public transportation to get to his marketing classes or buying food — not both. At the end of the day, the Veteran said he often makes himself go to sleep hungry.

"It’s just confusing," said Roundtree. "Who is there for us? Who is representing us? Who is helping us? Who is doing what they need to do to better the situation for Veterans?"

There are many Veterans, like Roundtree, across the country who are still waiting for VA to catch up with a backlog created after President Donald Trump signed the Forever GI Bill in 2017. The landmark piece of legislation greatly expanded benefits for Veterans and their families, but it did not upgrade the VA's technical capabilities to account for those changes.

While it is unclear how many GI Bill recipients were affected by the delays, as of Nov. 8, more than 82,000 were still waiting for their housing payments with only weeks remaining in the school semester, according to the VA. Hundreds of thousands are believed to have been affected.

The cause of the difficulty lies within VA’s Office of Information Technology, which was tasked with implementing a change in how the housing allowance was calculated, the agency said. The Forever GI Bill required that housing would be based on the ZIP code of where a Veteran went to school, not where he or she lived.

Issues that arose when VA attempted to stress-test their antiquated system, and a contract dispute over the new changes, meant VA waited until July 16 to tell schools to begin enrolling students, according to Veteran advocacy groups. Many colleges and universities waited, however, because the VA told them that they would need to re-enter their student Veterans' certifying information either way.

“That’s when the floodgates opened,” said Patrick Murray, the deputy director of the Veterans of Foreign Wars. “With all the delays trying to get the upgrades in the ZIP code processing, they suddenly got all their enrollments, which usually come during the spring across the summer. Instead they all came a few weeks before the fall semester, and they couldn’t keep up.”

A VA spokesperson told NBC News by email that "further system changes and modifications are being made and testing is ongoing on the IT solution" to fix the delay in monthly stipend payments.

"These changes have led to processing issues," a VA spokesperson wrote, referring to the GI Bill changes, "and VA is committed to providing a solution that is reliable, efficient and effective."

At the end of August, Veterans Benefits Administration had nearly 239,000 pending claims — 100,000 more than at the same point in 2017. As school began, thousands of students faced dire circumstances and some faced eviction, getting kicked out of school or taking on loan or credit card debt.

As the problem appears to have no clear solution, the House Committee on Veterans’ Affairs is holding a hearing Wednesday to investigate the matter.

The contractor hired by the VA to update its system for the Forever GI Bill, Booz Allen Hamilton, a multibillion-dollar information technology company, will be called to testify, a committee aide said. They will be joined by Under Secretary for Benefits Dr. Paul Lawrence and Director of the Education Service Robert Worley. A witness from the VA’s Office of Information and Technology will also be called.

"This is — to be kind — a train wreck,” said Rep. Phil Roe, R-Tenn., the chairman of the Veterans' affairs committee. “It’s really frustrating the amount of money that Congress has appropriated for Veterans, and this is the way VA has rolled it out. This discussion started over a year ago.”

In a Nov. 5 letter to Secretary of Veterans Affairs Robert Wilkie, Roe said that employees at the processing center told the group that IT systems at the office froze and crashed so often that tasks that once took five minutes now required 45 minutes. Computers often suffered a “blue screen of death,” which required restarting machines, and “managers had to write off 16,890 man hours due to system crashes or latency issues.”

“While Committee staff never witnessed a ‘blue screen of death,’” the letter said, “they did witness the system crash no fewer than five times in a 10 minute period.”

The VA declined to share how much the IT system failures, overtime payments and the 202 additional workers hired to address these problems have cost taxpayers.

As some Veteran advocates point out, this is not an issue that came as a surprise.

At the July 17, 2017, hearing in the House Committee on Veterans' Affairs — before the bill was passed into law — Deputy Under Secretary for Economic Opportunity Curtis Coy highlighted this as his core worry in response to one of the few questions asked during the hearing.

“My biggest concern is two words: IT,” said Coy at the time. “We have an IT system in much or almost all of these sections that requires some degree of changes.”

After Coy retired this year, the VA cut his position and the Office of Economic Opportunity. Multiple Veteran Service Organizations said the loss of this role, as well as the office, meant that there was no one left at the VA to communicate the issues to Veterans or to lobby higher-ups about the GI Bill issues.

That’s not to mention the huge number of posts that remain unfilled at the agency. More than 45,000 jobs sit vacant at the VA, according to the agency’s own numbers, and it has not had a permanent chief information officer since LaVerne Council departed the office after Trump’s election.

"Right now Secretary Wilkie and Dr. Lawrence have only been on the jobs for months,” Murray said. “People have been coming in and out of the VA like it’s a revolving door, and this is another example where a lack of consistent leadership causes these problems.”

But Veterans like Roundtree are less concerned about the leadership at the VA — they just want to know if they can depend on the money they earned under the GI Bill.

And advocates are similarly concerned as it remains unclear if the VA will be able to catch up before January, or if it will be inundated with new requests next year and fall even further behind.

“I don’t see that there is an immediate fix, and I don’t see how this is going to be addressed in the spring or summer semesters,” said Tanya Ang, the policy and outreach director of Veterans Education Success. “This needs to be something that has a greater focus on it for a lot longer."