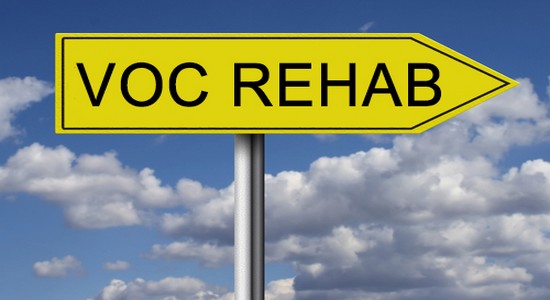 Here is a simple strategy to analyze your VA Voc Rehab denial despite the confusing Appeals Modernization buffet of appeals options including Higher Level Review.

Many Veterans are confused about their VA Voc Rehab denial and the next steps in analyzing your options after Appeals Modernization (February 19, 2019) – – almost as if the Veteran is walking on a ledge blindfolded.

The confusion is well earned. God knows the number of legal analysts VA hired to help create a more convoluted system than what it previously did.

Options for Veterans to appeal a denial were just increased from two to six, and with that change came an infinite number of options Veterans must consider. Luckily, despite the additional options and new decision matrix that resulted, any Voc Rehab denial usually has the starting point for any Veteran seeking to appeal.

This article provides a simple strategy for Veterans to follow when considering their options after being denied Voc Rehab benefits.

How do I know?

I have spent the past decade helping Veterans understand their Voc Rehab benefits, and five of those were as an attorney. Appellate laws may change a lot (and they have!!), but the strategy to unwind a scheming agency employee remains the same.

What I am about to say does not reflect all program employees. Many of them really care about Veterans. However, there are also many employees, including fellow Veterans, who are not following Voc Rehab’s mandate:

The purposes of this program are to provide to eligible Veterans with compensable service-connected disabilities all services and assistance necessary to enable them to achieve maximum independence in daily living and, to the maximum extent feasible, to become employable and to obtain and maintain suitable employment. 38 CFR § 21.1.

Over the past five years, many Voc Rehab Counselors have grown more conservative, sometimes even afraid, when making decisions about benefits. That fear has resulted in counselors banding together at some offices making decisions that contradict regulatory mandates.

What could it mean to enable a Veteran to achieve maximum independence in daily living AND to become employable and to obtain and maintain suitable employment TO THE MAXIMUM EXTENT FEASIBLE?

The answer should be “No” to all of those questions, but some offices allow their counselors to issue blanket denials for certain request types without regard to a particular Veteran’s fact set.

Why is this allowed?

Voc Rehab is a program rife with the herd mentality.

The herd mentality basically means everyone in the same organization things and says the same or similar thing, largely based on emotion rather than using logic and reason. Making it worse, some counselors believe Voc Rehab should never approve graduate-level training to include medical doctorates or related professional training.

In 2010, I wrote an article for Military.com called The Lies They Tell that I later renamed The Biggest Lies Voc Rehab Tells Veterans. There, I called out the top four lies some Voc Rehab Counselors tell Veterans, over and over. I say “some” because many counselors are great and do good work.

Those good counselors have yet to make a dent in the bad counselors or the culture that created them.

Almost a decade later, not only are those same lies being repeated, but the number of liars has seemingly increased. The only basis I can find for the consistent lies is herd mentality where the common culture supports violating the dreams of Veterans with unsupported denials.

Fortunately for you, I have catalogued the more consistent lies. And, since consistent lies are somewhat predictable, they lend themselves to the development of a strategy.

This strategy is useful for Veterans adversely affected by a denial that falls into this camp of lies or misrepresentations.

Due to fear of being undone or making errors that contradict the herd mentality, counselors err on the side of caution, at least to them, by drafting vague denial letters.

Before Appeals Modernization, many denial letters failed to mention regulations or statutes that supposedly supported the denial.

After Appeals Modernization, the denial letters are chock-full of references to statutes and regulations without actually citing them, and without a clear explanation as to why the facts presented do not form a basis for approval.

The problem with Voc Rehab’s new approach is that it fails to provide Veterans with adequate notice of the evidence evaluated or the real reason why the particular evidence does not support the request for benefits.

How The Denial Letter Should Look

Despite the vagueness, one thing is clear. Decision letters must still follow the regulatory requirements in 38 CFR § 21.420. This regulation explains what the counselor is required to put into all adverse decision letters.

Veterans now have an infinite number of factors to consider when selecting which of the six options they appeal – – and I use the term appeal loosely now that VA relabeled its appeal process with numerous “review” options.

My step one below is the simple strategy. From there, the appeals process gets much more complicated.

Anyway, the decision letter should include the following:

(1) Identification of the issues adjudicated.

(2) A summary of the evidence considered by the Secretary.

(3) A summary of the applicable laws and regulations relevant to the decision.

(4) Identification of findings favorable to the Veteran.

(5) In the case of a denial of a claim, identification of elements not satisfied leading to the denial.

(6) An explanation of how to obtain or access evidence used in making the decision.

(7) A summary of the applicable review options available for the Veteran to seek further review of the decision.

Most decision letters are templative meaning the majority of the letter is prewritten by Regional Office leadership. It will not apply directly to the Veteran without substantive edits.

Here, VA will likely screw up its requirements under 2-5. Voc Rehab Counselors frequently fails to identify favorable findings and evidence the Veteran may present.

Odds are most Veterans will be able to identify an error.

And that is the simple strategy. Review the Voc Rehab denial letter. Compare it against the facts and evidence you know was presented to the counselor.

Frequently, Veterans will find the error within the plain language of the denial letter. Easy peazy.

That is where the simple strategy ends.

Pick The Review Or Appeal Type

Veterans have a choice between multiple types of reviews that used to simply be called the appellate process. Apparently, VA thought the term “modernization” means “complicated.”

You can choose between a Higher Level Review, Supplemental Claim, or a formal Appeal. If you pick the Appeal, you will have the choice between a hearing, providing new evidence without a hearing, or simply having a Veterans Law Judge decide the issue without additional evidence. Be sure to pick the right form… Lol.

Okay, at this point you may be saying, “Krause lied — this new appeals process sounds too complicated for a simple strategy.”

Fair enough. I will cut to the chase, but the selection process to challenge a denial complicated, so I can only give you insight into what could work based on the type of error.

If the error in question is an interpretive error regarding the law as it relates to the facts, I suggest considering a Higher Level Review (HLR). For the HLR, request a formal hearing on the record – – this is like the old DRO process – – and ask that the sister station review.

This will ensure a fresh look at the facts and argument that avoids the possible herd mentality that impacted your denial.

If the error is a basic error of the evidence you presented, you should consider an HLR, too. This type of review will ensure that the error gets a senior look. You should request the hearing option and be ready to present the evidence, again.

If the Voc Rehab denial is maintained, then you could consider presenting additional evidence to supplement your claim in the Supplemental Claim process.

What I do not like about the Supplemental Claim option is that it allows the original counselor to make a decision on your claim. Unfortunately, if you were impacted by the herd mentality the first time, the counselor will likely double down.

If you are running into the herd, then your next best option could be to present new evidence and argument to the Board.

Now, the time for a Board hearing is still taking a while. So, the quicker option is the present new evidence and argument to the Board in writing. This should result in a speedy decision.

The unfortunate fallout of the new process is that Veterans lose their right to the agency’s duty to assist once the agency makes the first denial unless the denial was predicated on a failure to assist or some related error.

The trade-off is the quicker, but more confusing, adjudication process that can seemingly go on forever so long as you keep coming up with new evidence. Once you select one of the review options, you cannot change mid-stream but instead must wait until a new decision is rendered.

To provide feedback on the benefit of the old system… Back in the day when we used to walk to school uphill both ways, a Veteran could submit new evidence whenever it was developed.

The HLR is basically the program’s old Administrative Review with some new restrictions.

The new system is much more complicated than the old system. And, I can tell you the new system was not created for the purpose of making the appeal easy for Veterans, because it does the exact opposite.

This article gives you some ideas to consider when making decisions about your appeal.