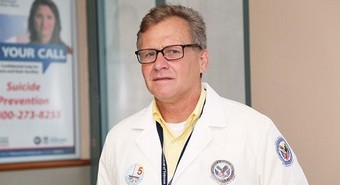 It’s been nearly 25 years since the infamous Battle of Mogadishu in Somalia occurred. The events of that conflict made a lasting impact, were reported all over the world and inspired the critically-acclaimed movie “Black Hawk Down”.

“There were so many vivid memories from that day, but the one that stood out the most was the moment that [Black Hawk] helicopter took that hit and was going down,” said Hooten. “Prior to that moment, we were pretty much done with our mission but when that happened we realized it was going to be a long day.”

Today, Hooten is far-removed from his days of battling opposing forces across the globe and has taken on a new mission of tackling the opioid epidemic facing our nation’s Veterans. He is a clinical pharmacist who just finished his residency with the West Palm Beach VA Medical Center. After rotations in several clinical areas at the medical center, Hooten discovered a passion for working with Veterans recovering from substance use disorder.

“I lost a couple of close friends that died of drug related overdoses and they were really good guys – special operations guys,” Hooten explained. “Losing my fellow soldiers to substance abuse was almost as bad as losing them in combat. All their talent and potential was lost and I wanted to do something about it.”

Dr. Donna Beehrle-Hobbs, director Postgraduate Year One Pharmacy Residency, couldn’t be prouder of Dr. Hooten’s accomplishments. “I have watched him grow throughout his residency and it’s been so inspiring to work alongside him at the West Palm Beach VA Medical Center,” she said. “His heart is truly in the right place and our Veterans are in great hands with Dr. Hooten at their side.”

Hooten’s wife, Bonnie who is also a pharmacist encouraged him to pursue the profession but his journey from U.S. Army Special Forces to VA pharmacist wasn’t an easy one. He initially retired from the military in August 2001 and started pharmacy school that same month but was recalled to active duty after the September 11, 2001 attack. After a deployment to Afghanistan, eight years with the Federal Air Marshal Service and contracting work in Jordan he returned to pharmacy school in 2012.

Many sacrifices were made along the journey to completing his education but Hooten preserved because he was determined to make an impact. “It’s never too late to make a difference and go back to learn and grow,” said Hooten. “You should give back until your last dying breath. I started [pharmacy] school at 52 and at 57 I’m finishing up my residency.”

Hooten completed his residency at West Palm Beach and started as a clinical pharmacist for the Orlando VA Medical Center on July 1. With his residency complete, he’s ready to put his experience to use.

“I can’t stand idle while Veterans suffer with addiction,” he said. “If I can help just one Veteran, or have just one call me later to tell me that I was able to help them get off opioids then that would tremendous.”