The Israeli Army Unit That Recruits Teens With Autism

The Israeli Army Unit That Recruits Teens With Autism 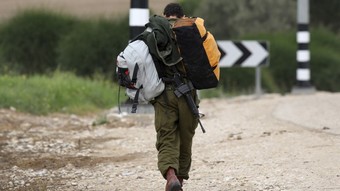 Many autistic soldiers who would otherwise be exempt from military service have found a place in Unit 9900, a selective intelligence squad where their heightened perceptual skills are an asset.

TEL AVIV—For eight hours a day, E., 21, sits in front of multiple computer screens, scanning high-resolution satellite images for suspicious objects or movements. As a decoder of Israel’s complex and often heavily civilian battlegrounds, he’s been critical in preventing the loss of life of soldiers on the ground in several different situations, his officers say.

For many people, combing through each millimeter of the same location from various angles would be tedious work—but E., who is on the autism spectrum, describes the job as relaxing, “like a hobby.”

E. (he requested his full name be withheld to comply with army protocol) is a corporal in the Israel Defense Force’s “Visual Intelligence Division,” otherwise known as Unit 9900, which counts dozens of Israelis on the autism spectrum among its members.

The relationship is a mutually beneficial one. For these young people, the unit is an opportunity to participate in a part of Israeli life that might otherwise be closed to them. And for the military, it’s an opportunity to harness the unique skill sets that often come with autism: extraordinary capacities for visual thinking and attention to detail, both of which lend themselves well to the highly specialized task of aerial analysis.

Geraldine Dawson, the director of the Duke Center for Autism and Brain Development, says that beginning early in life, autistic children may compensate for lagging social development by developing stronger-than-average perceptual skills, excelling in visually- and systematically-oriented activities like puzzles or drawings.

“People with autism often talk about thinking in pictures, rather than categorizing information according to language,” she explains. “They tend to think less in a holistic form, they’re integrating lots of pieces into a whole, and they’re much more likely to see the finer details of something.”

Those finer details are the nuts and bolts of the elite Unit 9900, whose soldiers act as eyes on the ground for highly sensitive operations, analyzing complex images delivered in real time from military satellites around the world.

But for many of the unit’s autistic soldiers, the more daunting challenge is learning to communicate and socialize with their peers.

E.—who, like many of the autistic soldiers in the unit, is considered “high functioning” and attended special-education program within a mainstream high school—says his adolescence was characterized by a general sense of “floating around,” both socially and academically. He had a hard time listening in class, though he performed well on tests. His sense of isolation was exacerbated by the special aide who accompanied him during the school day.

“It’s not fun at that age to have someone always watching over you, when you just want to hang out with the guys,” he said. But his biggest setback came in 12th grade, when he received an exemption letter from the army. In Israel, military service is compulsory for all 18-year-olds following high school, though exemptions are issued on a number of grounds, including residence abroad, religious reasons, or physical or mental disability. In 2008, the country ended the practice of issuing blanket exemption notices for autistic Israelis and instead began accepting them on a case-by-case basis, typically for secretarial roles or voluntary civil-service positions in hospitals and schools. None of these options interested E., who had decided he would enlist only if he could have a more typical experience.

But later that year, his school was visited by representatives from Ro’im Rachok (Hebrew for “seeing into the future”), a program that helps students with autism prepare for enlistment in the IDF. When they mentioned the two previous cohorts of autistic Israelis who had successfully served as image analysts, E. recalls, he became convinced that he could find a meaningful position as a soldier.

The pre-army course consists of three phases, beginning with a rigorous selection process: Students undergo tests and interviews to ensure that they have the skills to successfully analyze images, that they can adjust to the army’s rigid structure, and that they pose no risk to themselves or to their operations. Of the dozens of applicants this year, 12 candidates made the cut. (They can also choose to withdraw if the process proves too onerous.)

The second phase is carried out in conjunction with the health-profession department at Ono Academic College, which hosts the satellite-image analysis course at its campus in central Israel. During the three-month course, which runs three times a year, Unit 9900 commanders train the applicants using non-classified aerial maps. The students also meet frequently with a team of therapists who help them learn to adjust to new trials and stresses, from the responsibility of the work itself to figuring out how to take the bus from home to the army base.

These three months are considered the program’s “honeymoon phase,” when the candidates are full of excitement and motivation to learn. The organizers also encourage candidates to use the time for introspection, helping to foster discussions on the students’ futures as independent adults and their moral positions regarding the military, says Tal Vardy, a co-founder of Ro’im Rachok.

In the final three-month phase, Vardy says, the applicants continue their professional training and therapy sessions on an army base in Tel Aviv, and decide if they are ready for enlistment. Those that do enlist have the choice to opt out after the end of each year, or complete the typical required term of service. In Israel, men serve three years and women serve two; although Unit 9900 is coed, Ro’im Rachok has had just one female soldier to date (researchers estimate that there are up to three times as many men on the autism spectrum as women).

E., who connects strongly with the army’s structured atmosphere, says he plans to apply to stay on permanently. But regardless of how long they stay, many of Ro’im Rachok’s graduates depend on the connections and skills they build in the army to help them achieve independence once they leave it. Especially in the intelligence fields, military service is often a pathway to jobs in Israel’s booming tech sector. This is particularly advantageous for young people with autism as they approach the so-called “bloody 21,” the age at which almost all government-funded programs for autistic Israelis, like subsidized transportation and assisted-living services, are cut off.

Some research suggests that the rare visual capabilities required for Unit 9900 may come more easily to the autistic brain. A 2011 study, for example, found that childhood autism was two to four times more prevalent in the Dutch technology hub of Eindhoven as in other Dutch cities of similar size, support for a possible link between autism and scientific ability. Other people have observed a similar phenomenon in Silicon Valley.

“A growing body of research is showing that autistics outperform neurologically typical children and adults in a wide range of perception tasks, such as spotting a pattern in a distracting environment,” Laurent Mottron, a psychiatry professor at the University of Montreal, wrote in a 2011 column in Nature magazine. He added that most people with autism “outperform in auditory tasks (such as discriminating sound pitches), detecting visual structures, and mentally manipulating complex three-dimensional shapes.”

Israel, like many developed countries, has experienced a continuous uptick in autism cases over the past decade and a half. Between 2004 and 2011, the number of Israelis on the autism spectrum increased fivefold, with 1,000 new diagnoses per year, according to a survey released by the country’s Social Affairs Ministry.

But autism still carries a heavy stigma among Israelis. Autistic children are frequently suspended from schools for misbehavior, and the Knesset Education Committee has found that because there are no official special-education guidelines for autistic students, some teachers have requested that they receive stronger medication before they’re readmitted into class.

Partly as a means of reducing this stigma, Ro’im Rachok points to its soldiers as examples of what young people on the spectrum are capable of when they have the appropriate support systems. Efrat Selanikyo, an occupational therapist at Ono, says that she and her colleagues help to create one such support system by implementing strict and clear guidelines for the training phase of the program.

“For their [own] good, we maintain a strong sense of discipline, but we also need to prepare them for a reality in which things change very drastically,” she says.

At first, some have trouble following the rule that forbids them from discussing the unit’s activities with outsiders. But Selanikyo has also seen participants take the rules so seriously that they refuse to tell their parents anything about their experiences, their new friends, or their work. In response to calls from anxious parents suddenly in the dark about their children’s lives, Selanikyo now sends weekly emails with updates on the participants’ progress and wellbeing.

But she and her colleagues also help the participants take steps towards self-sufficiency and independence, one of the most important being their mastery of Israel’s public-transportation system. Selanikyo and the occupational therapists use the bus system as a lesson for other potential small crises: When a bus is off schedule, for example, they teach students to defer to an alternative plan rather than descend into panic. Several Israeli transportation companies have partnered with Roiim Rachok, and allow the participants to ride for free, despite the fact that they are not yet soldiers (active members of the military are eligible for free trips).

The organizers of Ro’im Rachok are currently working on plans to expand beyond Unit 9900. Future applicants will be able to train for additional intelligence units of the IDF, in roles like quality assurance, programming, and information sorting. This growth, they believe, will help the program continue its secondary mission of integrating people with autism into mainstream Israeli society.

“When the whole neighborhood suddenly sees their neighbor, a boy on the autism spectrum, coming home on Friday in uniform,” Selanikyo says, “and hears that they can also continue in these fields into civilian work—it naturally has an enormous influence.”