Taking the Spartan Pledge Against Suicide

Taking the Spartan Pledge Against Suicide 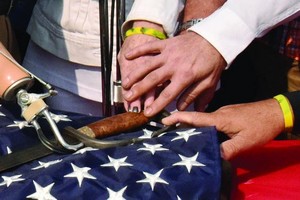 Taking the 'Spartan Pledge' Against Suicide

To fight epidemic, Veterans vow to serve and be there for one another

It started with a conversation about Veteran suicide and what is causing the "22 a day" epidemic.

It continued with a promise, which became the Spartan Pledge.

The Spartan Pledge is a commitment among Veterans to not take their own lives but rather stand for their fellow soldiers in times of despair. It was created almost accidentally by an Iraq Veteran, Boone Cutler, when he spoke with another Veteran, his friend "Nacho," about a mutual friend's suicide.

"I said to him, ‘Have you ever thought about it?'" Cutler said during an interview with NPR reporter Quil Lawrence. "And he said, ‘Yeah, I think about it every day.' And it blew me away. We'd never discussed that -- and we were tight. We covered each other."

Off the cuff, Cutler and his buddy made a promise.

"You really can't think too far ahead when you're in that state of mind, so I said, ‘Just call. Just call me first. Don't punk out. Don't go without saying goodbye,'" Cutler told his friend. "And then we made an agreement to at least call each other first."

Other Veterans helped that evolve into what Cutler started calling the Spartan Pledge, which he said around a thousand Veterans have made. It's just two lines, meant to give Vets a pause before they hurt themselves:

"I will not take my own life by my own hand until I talk to my battle buddy first. My mission is to find a mission to help my warfighter family."

Veterans commit suicide at a 50-percent higher rate than those who did not serve in the military, according to a study published last year from the Department of Veterans Affairs. A Veterans Pulse Survey released by the charity DAV (Disabled American Veterans) last Veterans Day found that 1 in 4 Veterans see suicide as one of the biggest challenges facing those who have served.

"You don't have to be suicidal to take the pledge," said Steve "Luker" Danyluk, a retired Marine lieutenant colonel who's also taken up the cause. "It's finding a mission: Help your buddy. It's reconnecting, re-establishing those relationships that seem to vanish once you leave the military."

When Danyluk and retired New York City Fire Department firefighter Danny Prince started talking about 25 pounds of steel recovered from the World Trade Center and the aftermath of the tragedy on 9/11, their conversation became about how they could use that powerful symbolism to bring attention to the terrible epidemic of Veteran suicide as well.

"It's remarkable, the pieces of steel that we have. They're so important, and you don't want to waste anything," Prince said in an interview with NPR reporter Quil Lawrence.

"The pure, almost religious nature of the steel from the World Trade Center was transformed into something about healing," said Danyluk.

The 9/11 attacks motivated a lot of people to join the military, Danyluk said, so the symbolism of the sword is important. "It's about transformation -- taking this twisted steel that was part of our nation's greatest tragedy and turning it into something beautiful: a weapon of healing rather than a weapon of destruction." Danyluk helped organize the Spartan Alliance, a collaboration of nonprofit Veteran organizations, and joined forces with Prince to create Spartan Weekend. The charity DAV got on board early, realizing the impact such an event could have for our nation's ill and injured Veterans.

"DAV proactively fights this epidemic by providing services that connect Veterans with care and address their quality of life, but this was a chance for us to become involved in a way where we could directly see an impact," said DAV National Adjutant Marc Burgess. "It was a new idea -- nothing like this had been done before -- so we knew we were in for something truly special."

Hundreds of Veterans, their families and caregivers attended the Spartan Weekend, held in Washington, D. C., in May. They gathered to raise awareness about Veteran suicide, a struggle many of them have faced head on.

"I know too many people who have chosen suicide over life, including my own supervisor," Air Force Veteran Sarah Bonner said. "That's why I came. I will do anything -- absolutely anything -- to make sure other Veterans don't choose that option. This weekend reminds us that we are not alone. We have our Veteran family. I could've been one of the 22, but I wasn't because of support. So now I'm here to show other Veterans I support them."

The weekend included a bike ride, a concert at the Hard Rock Cafe headlined by Kristy Lee Cook and other events designed to bond participating Veterans and family members. It culminated on Mother's Day with a nondenominational service at the American Veterans Disabled for Life Memorial.

The Rev. Matt Pawlikowski, an Army chaplain from West Point, officiated a Mother's Day service honoring Gold Star and Blue Star Mothers who have sons or daughters who are actively serving or have lost their lives in service.

Margie Miller, from New York, came to the event eight months and seven days after her son, a 22-year-old Marine, fatally shot himself. She talked about how they spoke on the phone most days and how she had just heard all about his plans, seemingly happy as ever, to go boating with friends. Two days later, her husband told her, "There are three Marines in the living room."

"You took a solemn pledge to protect our country," Miller told the audience of Veterans. "Take that same pledge, the Spartan Pledge, and protect yourself. Say, ‘I will reach out for help.'"

The ceremony closed with dozens of Veterans taking an oath against suicide.

"Come over here," Barrera said while reaching out to the sword with his prosthetic arm. "Gather around the sword with me; touch it. If you can't touch the sword, grab ahold of someone who is touching it, so we can form an unbreakable connection. You are not alone. We are here. Your family, your Veteran family." Everyone in attendance gathered around the sword and each other in an emotionally charged circle while they repeated the pledge.

The evening before the pledge at the memorial, Barrera shared his personal story and told his fellow Veterans that, even recently, he himself had contemplated suicide after moving and experiencing a setback to his physical health. The fight against the epidemic is something that requires constant vigilance, he said. Nearly a half-century after being severely burned in combat, and after years of counseling and mentoring others, he was only recently diagnosed with post-traumatic stress disorder.

"I realized I needed help. I thought about what it would mean to my family and my fellow Veterans if I had made that choice. I thought of all the people who had supported me, and that's what got me through a very dark period," said Barrera. "It's not just recent-era Veterans who contribute to these statistics. To solve this problem, we need to make a commitment as a community to be there for one another."

The event also featured DAV Past National Commander Dennis Joyner, a Vietnam Veteran and triple amputee, who is the president of Disabled Veterans' Life Memorial Foundation. "When the last bullet is fired, when the last man or woman steps off the plane or ship and comes home, for disabled Veterans, their struggles -- those that are visible and the ones we can't see -- remain an everyday part of life," said Joyner. "We as a community of Veterans and survivors must band together and ensure none of our own are left behind or forgotten."

The Spartan Pledge has caught fire in the Veteran community and continues to be a binding promise among suffering Veterans. While there can be no study of how effective the Pledge is, many say just having that "battle buddy" aware of what's going on inside can be the difference between suicide and life.

Cutler and a charity called The Gallant Few have made this mission to combat Veteran suicide with his creation of The Spartan Pledge. Warfighters promise not to take their own lives, and instead vow to find a new mission to help one another.

The newest data from the Department of Veterans Affairs states that 20 Veterans commit suicide every single day. Don't be one of the 20. Contact the Veterans Crisis Line – 1-800-273-8255 – or any medical professional if you're having thoughts of suicide.