Sexual assault: Here are the bases where troops are most at risk

Sexual assault: Here are the bases where troops are most at risk 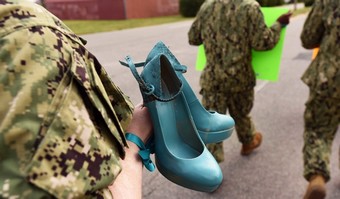 Men and women assigned to Navy ships at sea are far more likely to be sexually assaulted than service members at bases elsewhere across the force, according to a new Defense Department report.

Across the services, the safest places to work were at the Pentagon or other national capital region headquarters buildings, according to the report.

The Pentagon released the data on Friday as part of a much-anticipated report, that for the first time looks at the likelihood of sexual assault on a military installation or ship and ranks them by service.

The rankings were commissioned by the Defense Department and aim to help military officials to better identify the risk factors for sexual assault and how to most effectively deploy prevention and response efforts.

It is based on 2014 data that was gathered through more than 170,000 surveys of active-duty service members collected by the RAND Corporation. Because of the five-year time lag, defense officials said the rankings do not reflect what the most dangerous bases are today. The study faced other limitations too, such as that assaults reported that were linked to a base could have occurred off-base or off-ship, such as while on liberty or leave. But the information is still jarring:

In one stunning example, RAND found that “on one of these ships, we estimate that close to one in every 25 men was sexually assaulted in FY 2014.”

But RAND won’t name the ship, saying it was trying to respect the anonymity of the respondents. In the survey, RAND eliminated ships and bases with fewer than 50 survey responses, or with ship or base populations of less than 100 personnel.

For Navy women, ships were particularly dangerous, according to the report.

For both men and women, Navy ships assigned to the FPO code 96671 — which based on Navy data includes cruisers Champlain and Lake Erie, submarines Louisiana and Louisville, and destroyer William P. Lawrence — “are associated with risk more than 100 percent greater than the average installation-specific risk in the Navy," RAND found.

Navy officials did not receive an advanced copy of the RAND report but told Military Times that they look forward to working with the think tank on future surveys.

“We are aware of the 2016 RAND Military Workplace Study Survey, and we value the approaches that RAND takes to cutting edge research," the officials said in a written statement emailed to Military Times.

"The Navy has further engaged with RAND to help us take a closer look at the conclusions of this report by conducting follow-on projects to provide more actionable information about where sexual assault risk is highest and lowest in the Navy.

“This information will be vital to us in determining where and how to target training, prevention and response resources. We take sexual assault seriously and specifically want to understand the ‘why’ presented by the data. Identifying protective and risk factors is essential to mitigating the risk of sexual assault for our sailors.”

Fort Drum in upstate New York was one of the most dangerous places for both Army men and women in terms of risk of sexual assault.

“While the lowest-risk installations for men are dominated by small, command or support installations, the highest-risk list includes many installations with a more prominent combat unit presence,” the study found.

For the Army, a cross section of the top 15 most dangerous bases for men and women showed that "almost half of these highest-risk installations are identical,” the study found, suggesting that location or culture at those locations could be a contributing factor that could be addressed in further study, said Nate Galbreath, director of DoD’s Sexual Assault and Prevention Office.

“The Army remains fully committed to reducing sexual assault and sexual harassment in its ranks,” the Army said in a statement to Military Times. “RAND’s risk estimates, which are based on survey data from over four years ago, may help focus ongoing efforts to combat these harmful behaviors. While prevalence rates of sexual assault among the force have declined, the Army continues to integrate and update prevention programs.”

Undergraduate pilot training bases were among the most dangerous places for both Air Force men and women for the risk for sexual assault, the report found.

Marine Corps Air Ground Combat Center Twentynine Palms, in California, was one of the top five most dangerous places for male and female Marines for risk of sexual assault, the report found.

Responses for male Marines showed that the other most risky locations to be assigned included Japan, Korea, and Afghanistan.

In a statement, the Marines said more research is needed to understand whether increased risk is really tied to an installation.

“The RAND study documented differences in sexual assault risk across installations; the reasons for the variations in the levels of risk is not highlighted in this report,” said Marine Corps spokesman Maj. Craig Thomas. “There are many possible causes for differences, such as command climate, alcohol availability and price, crime rates in the surrounding civilian communities, or the transitory presence of one or more sexual offenders. Although the current study cannot identify the relationship between risk factors and risk estimates, additional research may help answer these questions.”

Galbreath said that now that DoD has the data, it will be able to look for installations where additional steps can be taken to reduce the risk of sexual assault. For example, around 2015, at Great Lakes Naval Base near Chicago, DoD noticed a spike in sexual assault reports and decided to take a closer look.

“What the Navy found out is that, locally there, on the weekends, all of the recruits were going off base and having hotel parties. And a lot of these hotel parties involved alcohol. And a lot of those situations ended up with sailors getting sexually assaulted,” Galbreath said.

The Navy got together with area hotel owners, Galbreath said, and told them, “If you have a bunch of sailors having a party, give us a call, we’ll be there, we’ll break it up we’ll haul everybody back to base.”

With that, and training initiatives, Galbreath said, the numbers started to improve.

“Sexual assault began to fall,” Galbreath said. "So that’s the kind of local work [that can reduce risk of attack]. But there’s 270 places that we have to do that at.”

The next survey is currently getting sent to respondents now, Galbreath said, and the results should be available in April.