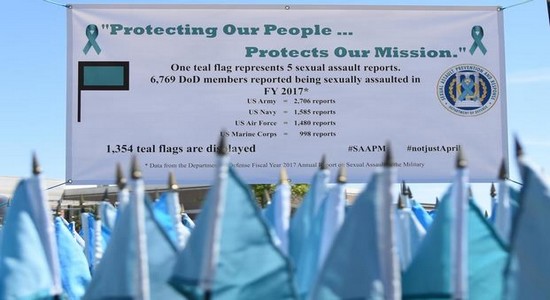 The Defense Department has created a sexual assault task force to study and make recommendations on improving how the armed services handle and prosecute sex crimes.

Pentagon officials said Tuesday that Acting Defense Secretary Patrick Shanahan ordered the establishment of a Sexual Assault Accountability and Investigation Task Force on March 27. That was the day after a Pentagon advisory committee released a report finding disparities in documentation of sexual assault cases across the services. Among the discoveries were incomplete files on how commanders made prosecution decisions.

The move also followed the January release of a report on sexual assaults at the service academies, which found that the estimated number of students who experienced unwanted sexual contact had increased 47 percent in the last two years.

The task force includes Dr. Elizabeth Van Winkle, executive director of the DoD office of Force Resiliency, and the services' top lawyers, who will review the processes used by the military to investigate sexual assault charges and prosecute cases.

The group will make recommendations "that will improve existing processes to address sexual assault while ensuring our formations, our communities, the rights of the victim and the accused and the integrity of the legal process are protected," Shanahan wrote in a memo to the service secretaries, the Joint Chiefs of Staff and other high-ranking Pentagon leaders.

"The importance of this work cannot be overstated," Shanahan said. "Only through diligence and innovation will we eliminate this reprehensible crime from our ranks."

Some Democrats in Congress have renewed efforts to amend the Uniform Code of Military Justice to remove the authority for deciding whether to prosecute sexual assault cases from military commanders.

Advocates for the change say it’s needed because the current system yields low prosecution and conviction rates and allows for retaliation against victims.

But a panel appointed by Congress in 2013 to study the command authority issue concluded that the incidence rates of sexual assault would not be reduced by removing convening authority from commanders.

That group, the Response Systems to Adult Sexual Assault Crimes Panel, also noted that, in the sexual assault investigation process, subordinate leaders such as noncommissioned officers and civilian supervisors were often the ones who ignored reports of sexual assault or retaliated against victims.

"Training and accountability for these leaders is imperative," the panel noted.

A different group, the Defense Advisory Committee on the Investigation, Prosecution and Defense of Sexual Assault, published its own report March 26. In the report, the group said it had reviewed 164 cases of penetrative sexual assault across the services and found that command decisions to refer charges were "reasonable" in 95% of the cases.

But members also noted that documentation justifying the decisions was spotty across the services. The advisory committee recommended that services have standard requirements for documenting command disposition and furnishing rationale for each decision.

Shanahan said the new task force's recommendations will complement the work of the advisory committee, and he pledged to continue preventing sexual assaults and supporting victims.

In his letter, Shanahan said the report on the service academies report and discussions with Sen. Martha McSally, R-Arizona, a retired Air Force fighter pilot who revealed during a hearing March 6 that she had been raped as a junior officer, led to his decision to create the task force.

"I pledged to do more, and I intend to carry out this commitment," Shanahan said. "Sexual assault impacts the entire force across all Military Services. None of us are immune to this crime and all of us are responsible."

The task force is expected to provide its findings in a final report to Shanahan by April 30.