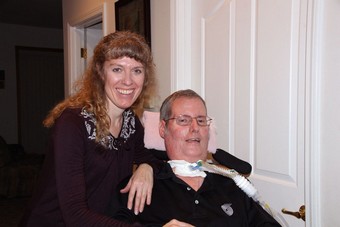 A Springfield Veteran with Lou Gehrig's disease who needs around-the-clock care is suing the U.S. Department of Veterans Affairs over a plan to force him to move to a nursing home out of state.

The lawsuit, filed in U.S. District Court in Eugene, says Michael Williamson has received in-home care for nearly 17 years through a company that contracts with VA's medical facility in Roseburg, the Roseburg VA Health Care System.

The company, New Horizons, notified Williamson in November that it will no longer be able to provide services for him after Feb. 13 because it can't find caregivers, the suit says.

Instead of finding a new provider, officials at Roseburg VA Health Care System told Williamson they had no other approved caregiving agencies in the area and that he would have to move to a nursing home in San Francisco, Boise or Washington's Puget Sound, the suit says.

"People shouldn't have to go to a hospital or institution to get care," Cooper said.

The U.S. Department of Justice said in a statement Thursday that it is reviewing the case.