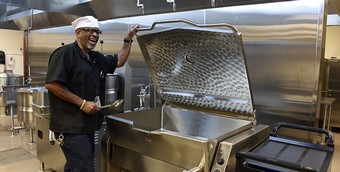 After he got out of the Army, Brumfield came back home to New Orleans, but fell on hard times and eventually became homeless. Having nowhere else to go, he walked into VA’s Community Resource and Referral Center and asked for help.

But it was a chance meeting with medical center director Fernando Rivera that really gave him food for thought.

“I got to talking with the director of the hospital and he said you ought to go to this program we’re setting up,” said Brumfield. “So I went and applied for it and I got accepted.”

Brumfield is the first from a class of six that graduated last December from The Teaching Kitchen.

The Teaching Kitchen is a partnership with the medical facility, the Greater New Orleans Volunteers of America and the Fresh Food Factor, a program that provides local homeless or at-risk Veterans with culinary job skills that could help them obtain employment in any one of the city’s many restaurants.

“The program was intense and, at times, difficult, but fun,” said Brumfield, who applied for a full-time position as a cook earlier this year.

Brumfield applied for the job, got it and now works in the inpatient kitchen preparing meals for patients and managing food deliveries as well as inventory, supplies and cutlery, uniforms and many other things necessary to keep the kitchen running.

“It feels great to be able to make sure the Veterans have good quality food that tastes good,” he said. “If the food isn’t good, you know Veterans are going to tell you. We make sure they get a good healthy meal.”

As for getting past homelessness, Brumfield has this advice for Veterans. “You can do it—I was homeless, I didn’t have anywhere to go. I just kept pushing and pushing, and the opportunity came up, and I took it. You just can’t stop trying.”