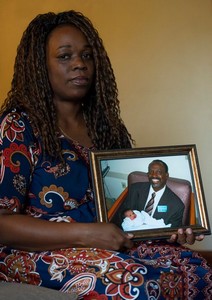 More than a year after her father died in his car in the parking lot of the Wilmington Veterans Administration Medical Center, Shelatia Dennis still struggles to understand why.

Salathiel M. Gaymon Sr.'s body was found April 25, 2017, more than 17 hours after he walked out of the facility after his regular treatment in the Hemodialysis Unit.

Dennis believes her father shouldn't have been discharged without having his condition assessed more closely.

Gaymon's death prompted an investigation by the Department of Veterans Affairs Office of Inspector General, which published a report in September that judged the VA harshly but didn't place blame.

The unit nursing staff did not appropriately monitor the patient's medical status, the report said, but could not "substantiate" that the care contributed to his death.

An autopsy indicated that Gaymon had cardiovascular and kidney disease and "probably" suffered a fatal cardiac arrhythmia.

The report did say that based on the available information and review of the electronic health record, quality of care concerns were identified related to Gaymon's clinical management while in the dialysis unit.

Changes at the VA

Wilmington VA Medical Center Director Vincent Kane said a day doesn't go by that he and his staff don't think about the events leading up to the tragedy. He was appointed shortly after Gaymon's death.

The OIG report and internal analyses sparked changes in staffing and procedures, including many within the dialysis unit and police department.

"If we could go back in time and know what we know now, I'm confident this wouldn't happen," Kane said. "We're committed to never letting something like this happen again."

Chief among the 14 recommendations from the OIG was having the proper number of staff members in the Hemodialysis Unit and providing continuous education in all areas of the unit.

According to Kane, that has happened and is now ongoing.

"We've added a tremendous amount of staff since my arrival," said Kane. "We want to make sure we have processes and staffing in place to prevent tragedies moving forward."

The police department has a new chief and those involved in the Gaymon tragedy were disciplined.

Appointed rounds directed by VA policy were not done, meaning no one noticed Gaymon.

"Those rounds should have happened. It's devastating to us," Kane said. "We've added more cameras and a training officer to make sure officers are compliant."

A man of principles

Dennis described her father as a man whose love of family was matched only by his love of God.

She said he had no problem expressing the love and pride for his family and was an affectionate man who couldn't encourage his kids and grandchildren enough.

But Dennis said her father also was all about advocacy and justice and often spoke out against injustices in the world. That is why one of his favorite musicians was Bob Marley, she said.

Dennis believes what happened to her father was an injustice.

"The quality of care that he was given was very poor," Dennis said recently from her Dover home on what would have been her father's 64th birthday. "It seems like anything that could have gone wrong did go wrong. It makes me so angry that they could get away with this."

Dennis said her father's blood glucose readings were through the roof that day in the Hemodialysis Unit, he was administered the wrong medication at the wrong time, his blood pressure was critically high and he was allowed to be discharged.

"He was not OK," she said. "How could they not see something was wrong? If they had, maybe we wouldn't have had to have a funeral in May."

Gaymon had been a regular patient at the Wilmington VA Medical Center since 1997 after he was diagnosed with diabetes. His medical records indicate he was often "noncompliant" in his treatment regimen and his diabetes was "uncontrolled" from 1997 to 2017.

Dialysis was initiated in early 2016, and a few months later a kidney specialist ordered a blood sugar reading prior to each of his dialysis treatments.

Gaymon's blood sugar was obtained 38 minutes after starting dialysis and it was shown to be critically high.

According to the OIG report, a unit registered nurse believed it was acceptable to test the blood sugar within an hour of beginning treatment.

The Office of Inspector General staff found no such policy.

The OIG determined that the combination of the timing of the blood glucose test, which found Gaymon's blood sugar critically high and sparked a "routine" call for insulin rather than "stat," or immediately, resulted in more than a two-hour difference in treatment.

The OIG report said the nursing staff did not check Gaymon's blood glucose before releasing him.

Policies regarding treatment of Gaymon's critically high blood pressure also were called into question by the report.

Gaymon was given medication to bring down his high blood pressure and then released 18 minutes thereafter.

The medication given reduces blood pressure within 30 to 60 minutes, with the maximum decrease occurring within two to four hours, the report said.

The report also said there was no evidence that staff conducted a full clinical assessment or provided Gaymon with instructions regarding the effects of the medication, including drowsiness and a recommendation not to drive.

Dennis said video from the facility showed an unsteady, unhealthy individual in medical distress as her father walked out of the dialysis unit and fell on the hood of his car before getting in it.

"The report was more confirmation," she said. "We already had a gut feeling that there was very poor quality of care and that there was definitely negligence on their part. We just didn't understand to what extent."

Dennis believes that even though the nurses and doctors failed her father, the Department of Veterans Affairs Police had an opportunity to "pick up the slack had they been doing their job."

If police had done timely rounds in the parking lots as policy requires, they would have noticed Gaymon sitting in his car in a no-parking zone in valet parking.

A hospital volunteer came across Gaymon in his car and alerted police.

"If they would have noticed him within an hour, that might have been enough time to alert the doctors and get some help," Dennis said. "There was no dignity in the way he died."

The officers were supposed to walk or drive the facility every hour, "so long as they are not on another call or doing a report.”

The report said the facility's police officers violated policies by leaving the patient’s car in a visible illegal parking spot for more than 17 hours.

Dennis recognizes her father's death affected changes, but said she will forever hold the facility accountable for taking her father away "too soon."

"There were so many opportunities for people to make decisions that would have supported his life being sustained," Dennis said. "The healthcare was obviously the first misstep. But if the police force would have been doing its job, my father might still be alive today."