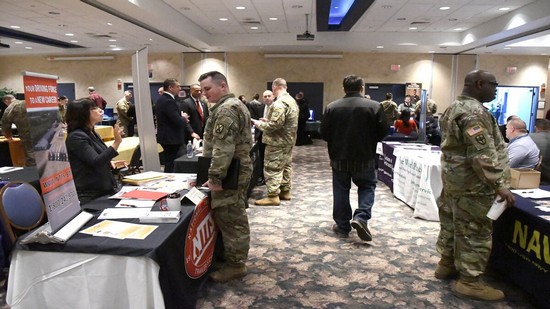 The unemployment rate among American Veterans rose for the second consecutive month in July, but it still remains significantly below the national rate, according to data released by the Bureau of Labor Statistics on Friday.

The agency reported the July jobless rate for Veterans rose to 3.4 percent from 3.3 percent in June, a small but noteworthy uptick given the spate of good news in Veterans unemployment over the last few years.

That number had been below 3 percent for four consecutive months before the June estimates. Among Veterans of the Iraq and Afghanistan war era, the unemployment rate in July was 3.6 percent, down slightly from 3.7 percent in June.

As a whole, the country’s unemployment rate remained steady from June at 3.7 percent. Only twice in the last 16 months has the national number topped 4 percent.

The 3.4 percent jobless rate for Veterans translates into about 316,000 former military members looking for work last month. That number was as high as 500,000 just three years ago and topped 1 million during the height of the U.S. recession in 2011.

Experts caution against drawing too many conclusions from individual monthly unemployment statistics, because the Veteran figures are taken from a much smaller sample size than the overall population, leading to volatility in some of the calculations.

Still, the monthly Veterans unemployment figures have remained below the national figure for 16 consecutive months, and have only topped estimates for the civilian population twice in the last decade.

The full unemployment report is available on the Bureau of Labor Statistics’ web site.