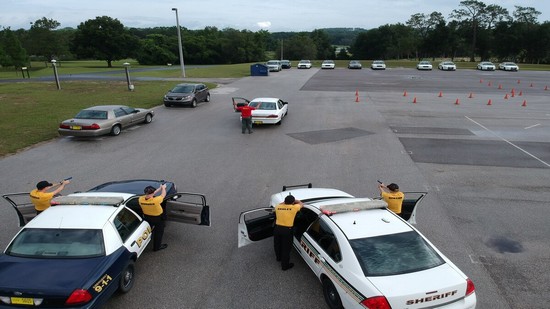 Run by the Pasco County Sheriff’s Office, the program is part of the the Law Enforcement Academy at Pasco-Hernando State College. While PCSO officials say they would consider hiring program graduates, those completing the course become eligible to serve in law enforcement departments of any Florida county, said Pasco County Sheriff’s Office Cpl. Jennie Jones, an academy instructor.

The program is in its infancy and seeking recruits, said George McDonald, a retired Army Green Beret colonel and the Pasco County Sheriff’s Office Bureau Chief of Joint Operations

The inaugural class is a little more than halfway done, said McDonald, with the last day of training scheduled for Sept. 25.

One Florida-based SOF community leader sees this as a win-win opportunity for everyone concerned.

“We need these young people in law enforcement because it is getting rough out there,” said Stuart Bradin, a retired Green Beret colonel and president of the Global SOF Foundation, a professional association for commandos. “We are losing a lot of people every year in the military, and we need them in law enforcement.”

The Global SOF Foundation also runs the SOF for Life program, which helps prepare transitioning SOF personnel above what the government provides in terms of support, career and continuing education.

The Pasco County program allows operators to seek another career path that will enable them to sleep in their own beds at night, be with their families, and to continue to serve their communities says Bradin.

“It’s Florida, they have gators, a body farm, forensic training nearby, flooding, these guys love this stuff,” said Bradin.

The SOF to Law Enforcement Program

McDonald explains that the new program’s recruiting office has been actively promoting the program through transition assistance support centers at multiple military installations. Additionally, he says, PCSO has an active memorandum of agreement with the United States Special Operations Command’s Warrior Care program, formerly known as the Care Coalition.

McDonald says that they are working with the SOCOM program that enables transitioning special operators to intern within the sheriff’s office. PCSO officials say the program offers the former commandos exposure to the culture and conduct of civilian law enforcement and to assist them with transition planning.

If during the internship, an operator likes the program and meets the recruitment needs of the agency, they may be offered an agency-sponsored SOF academy position with a possible chance of follow-up employment opportunity in Pasco County.

The academy program’s application process is $395 with additional tuition, books, uniforms, equipment and fees hovering around $1,250.

The classes and training averages about 490 hours broken into 18 training blocks with written exams at the end of each block. The course takes 17 weeks to complete says McDonald.

But transitioning SOF students get a discount. The program exempts former SOF members from 60 hours of physical training and 44 hours of critical incidents training.

“SOF members embody leadership skills that exceed the skills and abilities of the civilian population due to their unique training and years of extensive experience,” said McDonald. “Law enforcement is a career path that serves the population of the local community."

”We believe this is why a SOF Veteran is an optimal choice for civilian law enforcement," said McDonald.

SOF Veterans are less likely to crack under extreme pressure because they were trained to perform in austere environments under adverse conditions, he said. Prior SOF training enhances law enforcement’s ability to appropriately react to crisis situations with poise and concerted effort to preserve the sanctity of life at all costs.

“I’m stunned at how many SOF I run into all over the country that want to go into law enforcement,” said Bradin. “So, now I tell them about the Pasco County program.”