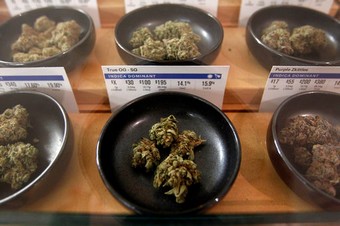 A Vietnam War Veteran who spent 22 years in the Air Force was fired last month from his job as the dean of academics at the Air Force Special Operations School for using a non-psychoactive cannabis extract to treat his prostate cancer.

Retired Capt. Henry Cobbs, 77, was dismissed from the Hurlburt Field, Florida, school, where he had served as dean since 2009, for “use of a cannabidiol (CBD), a Schedule 1 Controlled Substance,” the Herald Tribune reported.

Cobbs appealed, but the commander of the 492nd Special Operations Training Group, Col. Robert A. Masaitis, upheld the decision and informed Cobbs the termination would be permanently reflected in the retired airman’s file.

In response, Cobbs filed for retirement hours before he was scheduled to be terminated, the Herald Tribune reported, a move that would allow him to preserve his retirement benefits.

“My life has been sort of a storybook, to tell you the truth," Cobbs told the Herald Tribune. "I’ve been blessed. But to end it on a note like this is reprehensible. What I’m trying to do is protect my legacy.”

Cobbs' legacy is an impressive one.

The prior-enlisted airman’s military assignments include working as a Chinese Mandarin linguist listening in on enemy communications, an air intelligence officer with the 18th Tactical Fighter Wing, an air targets intelligence officer and a sensor operations detachment commander.

After completing his 22-year military career in 1982, Cobbs went on to work as an information and instructional systems adviser for the Saudi Royal Air Force in Riyadh, Saudi Arabia.

But a list of accomplishments in both the military and civilian sector couldn’t protect Cobbs from the military’s strict stance on the increasingly debated topic of medicinal marijuana.

After being diagnosed with prostate cancer in 2016, Cobbs began preparation for radiation and chemotherapy treatment, but opted against it when a doctor suggested an alternative medicinal plan comprised of dietary supplements, non-psychoactive mushrooms and CBD, the report said.

As part of his daily treatment, Cobbs would bring a vape pen with CBD to work. He even openly discussed the cannabis extract and his success with the alternative treatment plan while encouraging a coworker who had also been diagnosed with prostate cancer.

It was during that conversation that another colleague overheard Cobbs mention the CBD vaping. This individual then reported the 77-year-old for marijuana use in the office.

Although Cobbs said he doesn’t own a medical marijuana card, he insisted that his CBD supply comes from what amounts to a doctor’s prescription, a claim confirmed by a medical professional.

Dr. Ryan McWhorter sent a letter to Masaitis backing Cobbs' appeal and confirming that his Montgomery, Alabama, doctor’s office “prescribed CBD oil” for the Veteran, and that Cobbs received the medication "from our office only,” the report said.

Two other co-workers who spoke to the Herald Tribune on background said they supported Cobbs' use of CBD as a treatment for the disease.

His cancer is now in remission.

Despite any number of CBD success stories, however, the Department of Defense continues to take a hard line against any form of marijuana use, psychoactive or not.

“The current state of federal law is that medicinal use of marijuana and marijuana derivatives is not legal,” 492nd Special Operations Wing spokeswoman Ciara Travis told the Herald Tribune. “We will continue to follow the law and expect our employees to do the same. We are committed to providing a drug-free workplace for our employees.”

Now out of a job, Cobbs plans to continue taking steps in the appeals process to ensure his complaint of unfair termination is heard.

“I’ll go all the way to the U.S. Supreme Court if I have to,” Cobbs said. “I was only concerned with getting rid of my cancer, and the CBD worked. So to hell with the law.”