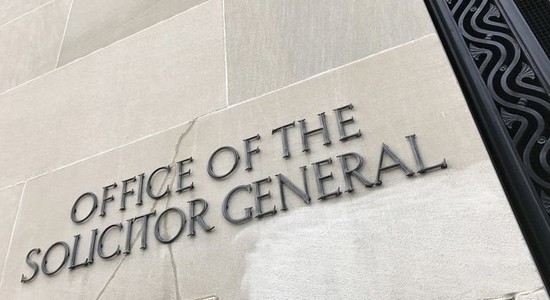 The U.S. Justice Department solicitor general's office is weighing a challenge to a Federal Circuit ruling that opened a door to Agent Orange-related benefits for Blue Water Navy Veterans.

Blue Water Navy Vietnam Veterans recently won the support of Veterans Affairs Secretary Robert Wilkie for a court ruling that could make tens of thousands of former service members and their survivors eligible for benefits stemming from exposure to Agent Orange decades ago. But now they are awaiting the Trump administration’s decision whether to challenge the ruling in the U.S. Supreme Court.

The Justice Department’s solicitor general’s office is weighing a challenge to the court ruling, issued by the U.S. Court of Appeals for the Federal Circuit. Any decision to appeal the court ruling would put the Trump administration at odds with Vietnam Veterans—and the head of the Veterans Affairs office. The benefits have been estimated to cost Veterans Affairs more than $1 billion over 10 years.

The so-called “blue water” Navy Vets served in the territorial waters offshore of the Republic of Vietnam. Until the Jan. 29 ruling by the full Federal Circuit, those Veterans had been denied the presumption of Agent Orange exposure during the Vietnam War. The Justice Department, supporting the Department of Veterans Affairs’s interpretation, had argued that the Agent Orange Act covered only those Veterans who served on the ground or inland waterways of Vietnam.

The 9-2 decision in Procopio v. Wilkie could open the door to tens of thousands of benefit claims by the Veterans. Diseases that the Veterans Affairs department presumes are associated with Agent Orange include ischemic heart disease, type 2 diabetes, Parkinson’s disease and various types of cancer. Wilkie recently said 51,000 claims are being processed.

During the March 26 budget hearing in the Senate Veterans Affairs Committee, chairman Johnny Isakson, R-Georgia, asked Wilkie: “Is it true, Secretary Wilkie, that Blue Water Navy’s court decision is not being challenged?”

The U.S. solicitor general, consulting with federal agencies, generally makes decisions on government appeals to the Supreme Court. Another complicating factor for the solicitor’s office is the fact the U.S. State Department has expressed interest in having the Federal Circuit decision appealed.

The State Department is concerned the Federal Circuit ruling could have international law implications beyond the Agent Orange Act. A Justice Department representative said no decision had been made yet on an appeal.

“We’ve heard the State Department has some issues,” said John Wells of Slidell, Louisiana, who was on the Vietnam Veterans’ legal team with Melanie Bostwick, a partner at Orrick, Henderson & Sutcliffe who argued the case. The Federal Circuit rejected the government’s request to put its decision on hold until the government decided whether to appeal, Wells said.

“Since the mandate has issued, Procopio is now the law of the land unless and until it’s overruled,” Wells said. “On April 1, the chairman of the Board of Veterans Appeals lifted all stays [on claims] at the board and they’re starting to reassign those cases to be heard by a board member.”

The issue before the Federal Circuit was whether the phrase “served in the Republic of Vietnam” unambiguously included service in offshore waters within the recognized territorial limits of that country.

“The intent of Congress is clear from its use of the term ‘in the Republic of Vietnam,’ which all available international law unambiguously confirms includes its territorial sea,” Federal Circuit Judge Kimberly Moore said in the majority opinion. “This uniform international law was the backdrop against which Congress adopted the Agent Orange Act.”

Judges Timothy Dyk and Raymond Chen, both voting in dissent, said the Agent Orange Act was ambiguous and Congress, not the court, was the appropriate body to resolve the issue.

The Federal Circuit majority’s decision overruled an earlier decision, issued in 2008, in Haas v. Peake. That ruling had affirmed the Veterans Affairs office’s interpretation limiting the presumption of Agent Orange exposure to “boots on the ground.”

In asking the appellate court to put its ruling on hold pending its decision on a Supreme Court appeal, Justice Department lawyers unsuccessfully argued that “there are substantial grounds for disagreement that warrant the granting of a petition for a writ of certiorari.”

The formal deadline for the solicitor general’s filing of a petition in the Supreme Court is April 29, but an extension of time may be requested.