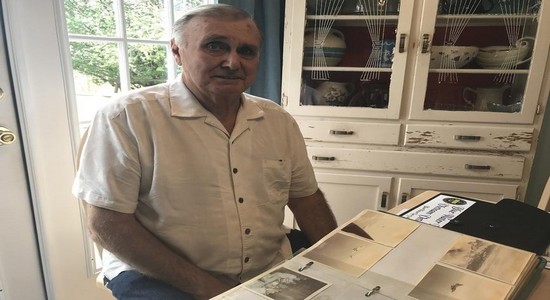 WILLIAMSON — Mike Sherwood applied nine years ago for government compensation for exposure to Agent Orange during the Vietnam War, complaining it caused the coronary artery disease and other serious health problems that still afflict him today.

The Navy Veteran believes he came into contact with the toxic defoliant while serving aboard the Intrepid aircraft carrier in the Gulf of Tonkin and South China Sea between 1968 and 1969. But the Veterans Affairs Department rejected his application, saying he needed to submit evidence of “in-country service” in Vietnam or proof of exposure to herbicides, a high bar decades after the fact. So, Sherwood gave up.

However, a January federal appeals court ruling in favor of another seaman with similar complaints who served on the Intrepid and related legislation pending in Congress are renewing hopes for Sherwood. He is among the so-called Blue Water Navy Veterans — an estimated 90,000 served on ships off the coast of Vietnam — who could be eligible for VA benefits for Agent Orange exposure under the court decision. Sherwood is gathering his records and has contacted an attorney about pressing his claim with the VA.

“I have been denied for not having boots on the ground,” said Sherwood, a 71-year-old retired homebuilder who lives about 40 miles south of Atlanta. “When I finally heard about this and the possibilities of it, I just went kind of crazy. I started digging.”

Georgia senator in the mix

During Operation Ranch Hand, the U.S. military sprayed Agent Orange to deprive Communist forces of cover and crops in the dense jungles. The herbicide — it got its name from the orange-striped barrels in which it was stored — contained one of the most toxic forms of dioxin, a compound linked to some cancers.

The VA provides compensation and health care to troops who served on the ground in Vietnam or on its inland waterways and are suffering from seven forms of cancer and seven other illnesses it says are linked to Agent Orange exposure, including the ones that trouble Sherwood today.

The VA has resisted extending those benefits to Navy Veterans like Sherwood who never set foot on Vietnamese soil, warning the science linking them to Agent Orange exposure is tenuous. The non-partisan Congressional Budget Office has said the additional cost of the benefits could reach $2.5 billion over 10 years. And the VA said that would divert funding from other priorities.

“The accomplishments we have made with congressional assistance will be stymied due to the fact that we will have to research and evaluate what could total over 30,000 potential claims,” VA Secretary Robert Wilkie wrote in a September 2018 letter. The Veterans Benefits Administration’s “current resources,” he added, “are not adequate to begin this workload.”

On the opposing side of the fight has been Georgia Republican Sen. Johnny Isakson, chairman of the Senate Veterans’ Affairs Committee. He has pushed legislation to extend benefits for the Navy Veterans. While the House unanimously passed it last year, a pair of fiscal conservatives blocked its progress in the Senate. One of them was libertarian Sen. Mike Lee, R-Utah. He urged colleagues to wait for the results of a scientific study to first ensure there was a clear link to Agent Orange exposure for those Veterans.

G-II Varrato II — an Air Force Veteran, Phoenix Realtor and director of the Arizona chapter of the Veterans Association of Real Estate Professionals — also fought the legislation. He supports the plight of Blue Water Vets but took issue with some of the ways the bill proposed offsetting the cost of the expanded care. It would have raised certain VA home loan fees.

“It is not about the dollar. It’s about honoring those that served and gave part of themselves to this country,” said Varrato, himself a disabled Veteran.

Isakson’s House colleagues are ready to try again this year. They introduced H.R. 299, which would extend benefits to Veterans who served offshore of Vietnam during the war. The measure includes a retroactive provision to cover those who filed VA compensation claims as far back Sept. 25, 1985.The U.S. Court of Appeals for the Federal Circuit changed the political dynamic in January when it ruled in favor of Alfred Procopio Jr. He served on the Intrepid during the war and was rejected for VA benefits for his diabetes and prostate cancer. The government has linked both ailments to Agent Orange exposure. The court ruling requires the VA to cover the costs of extending the benefits to Blue Water Veterans, regardless of whether Congress passes its own legislation.

The Justice Department has until April 29 to decide whether it will appeal the ruling to the Supreme Court. A Justice Department spokeswoman declined to comment about her agency’s plans. But Wilkie recently told federal lawmakers he has recommended that the Trump administration stand down. If the appeals court decision holds, Isakson has pledged to work with the VA to help implement it.

Isakson said he wants to make Blue Water Navy Veterans benefits “simple and right. That’s what I intend to do.”

‘Skinny rascal’ Sherwood recently sat at his kitchen table, sifting through his military records and copies of Intrepid deck logs and gazing at fading photos of himself serving on the carrier. In one picture, he is standing on the deck, holding his camera up to his face and taking a selfie. Shirtless, he is lean and wiry in the photo. Sherwood said he lost more than 30 pounds during the war, becoming a “skinny rascal.”

He never went ashore in Vietnam. But he pointed out the Intrepid drew its drinking, laundry and bathing water from off the country’s coast. He also worked on many airplanes that flew over Vietnam, securing them to the deck of the Intrepid, cleaning them, attaching bombs to them and strapping the pilots into them. Agent Orange, he said, “didn’t just stop at the shoreline.”

“It was in the water. It was on the planes. I mean, we crawled all over those planes,” he said.

In December of 2005, Sherwood felt ill and went the hospital, where he was diagnosed with ischemic heart disease. That’s one of the illnesses the VA says is linked to Agent Orange exposure. A nurse came into this room and told him he had experienced two heart attacks. He underwent quadruple bypass surgery. Three years later, his feet began tingling. Doctors told him he had diabetes, which can cause neuropathy, or numbness. In 2017, he had three stents inserted in his arteries. He now takes four types of medicine for his blood pressure and diabetes.

At stake for him, Sherwood said, is what he estimates could be more than $2,000 in additional monthly VA compensation for Agent Orange exposure. Now retired, he lives in a modest home southwest of Griffin with his wife, Brenda Hunton, drives a 2001 GMC truck with 180,000 miles on it and receives some Social Security benefits.

“That would help me make it until I die,” he said of the additional VA compensation he is seeking, adding there are many other Navy Veterans like him. “We are all struggling. Ain’t none of us Rockefellers here. We are all living day to day.”