Will the benefits for ‘blue water’ Vietnam Veterans be settled soon?

Will the benefits for ‘blue water’ Vietnam Veterans be settled soon? 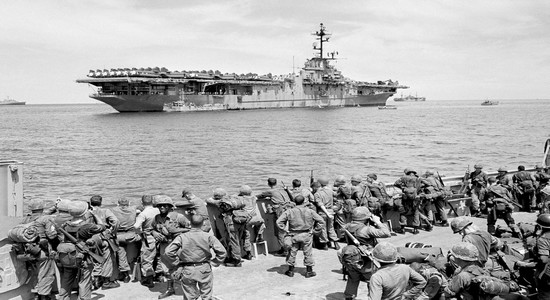 The fate of disability benefits for “blue water” Vietnam Veterans will be among the key topics lawmakers tackle when they return from their district break at the end of the month.

In January, a federal court ruled that the Department of Veterans Affairs for years has used faulty reasoning to deny disability benefits to Veterans who served in ships off the waters of Vietnam. VA officials had argued that extending the benefits to an additional 90,000 Veterans would cost as much as $5 billion over 10 years, a figure that advocates have disputed.

This week, Sens. Kirsten Gillibrand, D-N.Y., and Steve Daines, R-Mont., announced plans to reinforce that ruling and establish a permanent fix for those Veterans, who claim exposure to cancer-causing chemical defoliants has caused a host of rare cancers and respirator illnesses.

Already the chairman and ranking member of the House Veterans’ Affairs Committee have introduced similar plans, and that House panel is preparing for an expansive hearing on the topic early next month.

The Department of Justice has until the end of the month to appeal the ruling, but VA Secretary Robert Wilkie has advised against doing so.

“Even though the court has ruled that the VA must provide these benefits, there is no guarantee it will happen,” Gillibrand said in a statement. “Congress must create a permanent legislative fix.”

Lawmakers came close to passing a bill doing that last year, but the measure was blocked on the Senate floor in the final days of December. Gillibrand and Daines said Congress needs to act now to ensure that any VA response to the court ruling isn’t crafted too narrowly, again blocking aging Veterans from receiving their deserved payouts.

The “blue water” Veterans problem centers on the idea of presumptive benefits claims. Because of the heavy use of chemical defoliants (like Agent Orange) during the Vietnam War, VA assumes any Veteran who served on the ground there and later contracts an illness that could be related to toxic exposure should be presumed to have a service-connected health condition.

That significantly reduces the paperwork and wait for disability benefits, worth up to several thousand dollars a month.

Under current department rules, the “blue water” Veterans — individuals who served in ships up to 12 miles off the coast who never made landfall — can receive medical care for their illnesses through VA.

But to receive disability benefits, they must provide scientific proof that their ailments are directly connected to toxic exposure while on duty. Advocates have said that, given the time that has passed since the war, obtaining such proof is impossible and unfair.

So while a Veteran who served on the shoreline could receive disability payouts after contracting maladies like Parkinson’s Disease or prostate cancer, another Vet who served on a ship a few miles away would have to provide evidence of direct contact with hazardous chemicals to receive any payouts. Supporters have said such successful claims are rare.

Earlier this month, Wilkie said he was already working with lawmakers on possible future plans for awarding the benefits, and how to pay for them. John Wells, retired Navy commander and the executive director of group which filed the lawsuit, Military-Veterans Advocacy, has said he is in conversations with VA leaders about those issues as well.

The House hearing is expected to touch on the costs — estimated by Congress at $1.1 billion over 10 years, although the court ruling changes how Congress must account for those expenses — and other eligibility questions. The full House chamber could vote on a compromise plan in May.

Daines called quick action on the issue a “common sense” move to help Veterans who served honorably. Gillibrand said she is hopeful the Senate can act quickly on the issue.