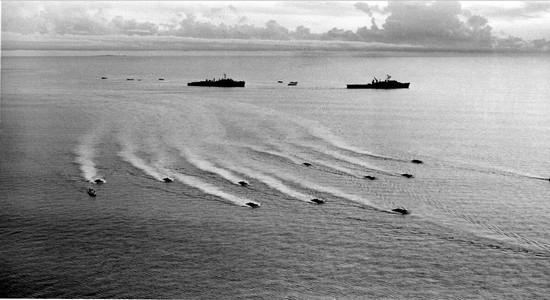 For the second time in the last 12 months, House lawmakers overwhelmingly passed a measure to ease disability benefit rules for Veterans who served on ships off the coasts of Vietnam and suffered serious illnesses they insist are connected to chemical defoliant exposure.

And, once again, advocates are left waiting to see if the Senate will follow suit.

The legislation — the Blue Water Navy Vietnam Veterans Act — passed 410-0 with strong messages of support from both Democratic and Republican leadership. House Veterans’ Affairs Committee Chairman Mark Takano, D-Calif., said the move is needed to correct what he called years of mistakes in denying those Veterans disability benefits for their injuries.

“Congress has failed our blue water Navy Veterans, plain and simple,” he said on the House floor before the vote. “Today, we will right this wrong … This bill is the quickest and clearest route to delivering benefits to those who served. They have waited long enough.”

The measure affects about 90,000 Veterans who served on ships during the Vietnam War but never set foot in the country. If they had, they would be eligible for presumptive benefits from the Department of Veterans Affairs, a process which bypasses hard evidence connecting a Veteran’s illness to their military service because of an established presumed connection between the two.

Advocates have said that is all but impossible to do decades after the war, with limited monitoring and water testing documentation still available. As a result, many “blue water” Veterans have been denied disability benefits, despite contracting some of the same illnesses as their peers.

In January, the U.S. Court of Appeals for the Federal Circuit ruled that VA officials have improperly interpreted the law in denying those claims, essentially awarding the benefits to the entire class of Veterans.

VA officials have recommended against an appeal of that ruling, but Department of Justice officials have not yet made a final decision. The deadline for an appeal was extended by the Supreme Court until the end of this month.

House lawmakers argued that regardless the outcome of the legal case, Congress should act now. The chamber approved nearly identical legislation last summer, again by an unanimous vote. The bill ultimately was blocked by a pair of senators in the waning days of the last legislative session.

Senate Veterans’ Affairs Committee Chairman Johnny Isakson, R-Ga., has backed the measure in the past and promised to address the issue again at some point this year, but has also said he wants see how the court case is resolved.

Supporters in the House said they don’t want to wait for that.

“Congress should not wait for this issue to work itself out through VA or the courts,” said Rep. Phil Roe, R-Tenn., ranking member on the House Veterans’ Affairs Committee.

“These Veterans have waited long enough to receive acknowledgment from VA … Five hundred and twenty three Vietnam Veterans are dying each day. So if the VA and this government waits long enough, (they’ll) all die.”

The measure has support of a host of Veterans groups, including Disabled American Veterans, the American Legion, Vietnam Veterans of America, and the Veterans of Foreign Wars of the United States.

However, officials from the Blue Water Navy Vietnam Veterans Association and Military-Veterans Advocacy have announced opposition to the measure, saying the geographical parameters laid out in the measure are more restrictive than what the court order earlier this year included.

Lawmakers have also argued that Congress needs to act to find a way to pay for the additional costs of extending disability benefits to the “blue water” Veterans. Congressional Budget Office officials had estimated the new awards could total about $1.1 billion over 10 years, but VA officials said the figure could rise to more than $5 billion.

The legislation adds a new fee on some VA home loans to raise money for those expenses, although disabled Veterans would be exempt from those costs.