SC Navy Vets with Agent Orange illnesses almost had benefits. But the VA is delaying them 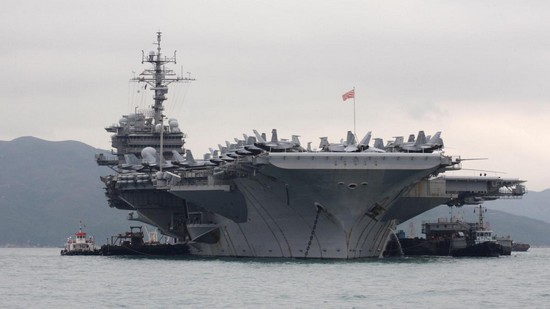 He has been told it likely happened as a young sailor aboard the aircraft carrier Kitty Hawk during the Vietnam War when he drank the ship’s distilled water. Since leaving the service, the 71-year-old Fort Mill resident has had to keep fighting.

He has been consistently denied government health benefits relating to his exposure to the toxic chemical, and it has been a roller coaster of uncertainty with no end in sight.

Hawkins has been diagnosed with ischemic heart disease, which the federal government says is a condition connected to the chemical that was used during the Vietnam War to clear vegetation in the jungle. He is one of the thousands of “blue water” sailors who served aboard aircraft carriers, destroyers and other ships in the territorial seas and were exposed when they made port or came in contact with contaminated water.

The Air Force sprayed at least 11 million gallons of Agent Orange on the Vietnamese countryside between 1962 and 1971, according to the nonprofit Institute of Medicine.

After fighting for years to be recognized as eligible for these benefits — and recently being approved for them — there is yet another roadblock.

Earlier this month, Department of Veterans Affairs Secretary Robert Wilkie chose to delay the claims for tens of thousands of Navy Veterans, despite becoming eligible in June for VA disability compensation related to Agent Orange exposure. He said claims don’t need to start being processed until Jan. 1, 2020.

But time isn’t a luxury that aging Navy Veterans have.

“It’s an uphill battle,” Hawkins said. “For them, it’s a waiting game. We’re slowly dying off.”

To fight back, several Veterans’ advocacy groups filed a joint lawsuit Monday that claimed Wilkie doesn’t have the authority to put a pause on the claims.

“These Veterans are dying at a high rate every single day,” the lawsuit states. “These Veterans deserve the peace of mind and sense of closure that accompanies a granted claim for earned benefits.”

One of the groups who filed the chief lawsuit was the Blue Water Navy Vietnam Veterans Association. While the VA estimates that between 420,000 to 560,000 sailors could be considered under the blue water provision, advocacy groups believe the number to be much lower and closer to 90,000. While the VA is worried about a burden on benefits, advocates say the lower figure is more accurate and financially realistic.

Yates, the national executive director of the Blue Water Navy Vietnam Veterans, said there are at least 17 blue water Veterans they’ve identified in South Carolina, but there are likely many more.

“It’s ridiculous. We should be qualified, just like anybody else,” Yates said. “The Secretary doesn’t realize so many of us are dying every day. It’s not fair to us.”

Veteran Stephen Wright was in Charleston Memorial Day weekend reuniting and reminiscing with fellow Navy sailors who served aboard the missile destroyer Preble. But in the months following that reunion, the Augusta resident has been fighting to get a claim related to his prostate cancer, another side-effect of Agent Orange acknowledged by the VA.

“If you were 18 then, you’re roughly 65 now,” Wright said. “A lot of those guys who were there, they’re getting to the point where they’re going to get the benefits or they’re going to pass on. It’s just another delay tactic ... like they say ‘delay, deny until they die.’ ”

The journey for these benefits looked bright at the beginning of the year.

On Jan. 29, in a 9-2 decision, the federal Court of Appeals in Washington, D.C., ruled in favor of Navy Veteran Alfred Procopio Jr. in a case against the VA, finding the intent of Congress in the Agent Orange Act of 1991 was to extend benefits to all Veterans who had been awarded the Vietnam Service Medal.

In June, it seemed like the fight was almost over. President Donald Trump signed off on the Blue Water Navy Vietnam Veterans Act of 2019, which granted government benefits to thousands of Vietnam Veterans who were previously ineligible.

That same month, the Department of Justice decided not to appeal a court ruling that confirmed their right to disability compensation and other benefits from the VA.

“It was snatch defeat from the jaws of victory,” John Wells, executive director of Military-Veteran Advocacy, said, reversing the well-known phrase “snatch victory from the jaws of defeat.”

Wilkie interpreted a provision in the Blue Water Navy Vietnam Veterans Act of 2019 to say he can enforce a stay on a claim until the law goes into effect Jan. 1. The secretary’s decision prompted an aggressive response from senators.

“This is a disheartening and unnecessary action,” Gillibrand and Daines wrote. “There is nothing left to do besides processing the claims, and we strongly urge the VA to do so as quickly as possible. Delaying these benefits for another six months without specific and valid cause only adds insult to these Veterans, many of whom have been waiting for these benefits for seventeen years.”

Eleven other senators — none from South Carolina — signed another letter that requested the VA make decisions on claims for Blue Water Navy Veterans “with as much urgency as possible.”

Ken Farnaso, the press secretary for Sen. Tim Scott, said his office has been in contact with the VA.

“Based on staff level conversations, the Veterans Dept. says that the stay is place so they can have additional time to develop policies supporting the law, hire and train additional staff to comply with the law, and gather and digitize records from the Naval History and Heritage Command in order to support faster claims decisions,” Farnaso said in an email.

In a response to Military-Veteran Advocacy, Wilkie “determined that issuing the stay was in the best interests of Veterans and VA adjudication system as a whole. ... We are working to ensure that we have the proper resources in place to meet the needs of our Blue Water Navy Veteran community and minimize the impact of the Act on all Veterans filing for disability compensation.”

But Veterans like Hawkins just hope it won’t be too late.

“Hang in there; try to live through it,” Hawkins said. “Make sure you can grab your benefits if you can.”