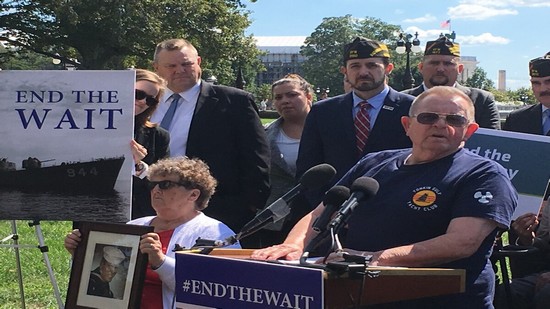 Doctors have told Navy Veteran Bobby Daniels that he may only have another two years before his terminal prostate cancer takes his life, so he was furious in June when Veterans Affairs officials announced a six-month delay in processing “blue water” Vietnam benefits cases.

“It just feels like they want for us old boys to die out, so they don’t have to worry about us anymore,” said Daniels, a 79-year-old Missouri resident. “Everything has been on hold for us. I don’t know how much more we can downsize while we wait.”

Daniels, who served on the USS Lexington 58 years ago, was one of several Veterans on hand at a Capitol Hill rally Tuesday asking for the White House to force VA to move ahead on a host of toxic exposure benefits cases that have been delayed while department officials update their processing systems to absorb the new cases.

“Our pleas (to VA) have fallen on deaf ears,” said Shane Liermann, deputy national legislative director for benefits at Disabled American Veterans. “We’re calling on President Trump directly to end the wait for these Veterans … He can and should end it today.”

In June, Trump signed into law legislation finalizing presumptive benefits status for “blue water” Veterans who served on ships off the coast of Vietnam during the war there. As many as 90,000 Veterans could be eligible for thousands of dollars a month in disability benefits under the law.

But in July, VA Secretary Robert Wilkie announced plans to halt processing of those claims until January 2020 to allow his department time to set up new computer systems for handling the cases to ensure the system isn’t overwhelmed by a flood of new claims. He has noted on several occasions that the law as drafted allowed for the processing delays.

Advocates note that the delay was not required, however. They note that some cases were processed earlier this summer before the stay was announced, and insist that more could be fast-tracked if VA would drop its stubborn new policy.

“It’s hard to look these Veterans in the eye and tell them they have to wait even longer for their benefits,” said Ryan Gallucci, deputy director of the Veterans of Foriegn Wars’ National Veterans Service. “Some of these cases could be settled today.”

Both House Veterans’ Affairs Committee Chairman Rep. Mark Takano, D-Calif., and Senate Veterans’ Affairs Committee ranking member Sen. Jon Tester, D-Mont., said they have repeatedly asked VA for more information on their benefits delivery timeline, but so far have received no answers. VA officials dispute that, saying they have provided a pair of briefings to congressional staff along with other documentation.

The lawmakers and advocates are also pressing VA to move ahead with a long-pending decision to add several new illnesses to the list of presumptive benefits cases linked to Agent Orange. The presumptive status allows Veterans to skip a host of documentation and paperwork when filing a claim, speeding up their receipt of payouts.

White House officials did not respond to requests for comment on the benefits issues.

VA officials sent a letter to Veterans groups updating them on the work thus far to prepare their staff for the new cases, but not offering any changes in the proposed timeline for starting to process them.

Several advocates worry that even if the department begins taking cases starting in January, it could be another long wait before Veterans see any payouts, since processing can often take months.

For Veterans like Daniels, it could mean the difference between receiving regular checks or dying without any response to their health problems.

Daniels served as a petty officer second class on the Lexington. It took 33 years after his tour of duty for the first of his cancers to appear. It took another 12 years before VA recognized any service-connected medical conditions for him, and even then it was for dental problems, not toxic exposure.

The dying Veteran, who would qualify for benefits under the new law because his ship traveled through a designated area believed to have been exposed to Agent Orange contamination, said he wants to get his case settled soon so his wife, Judy, will have a more stable income after he passes.

In recent years, he has taken out a second mortgage and sold off personal possessions to pay for medical treatments for his cancers, still not officially recognized by VA as linked to his services in the seas around Vietnam.

“My biggest fear is leaving Judy behind in tough times to struggle alone,” Daniels said. “She shouldn’t have to face these issues.”