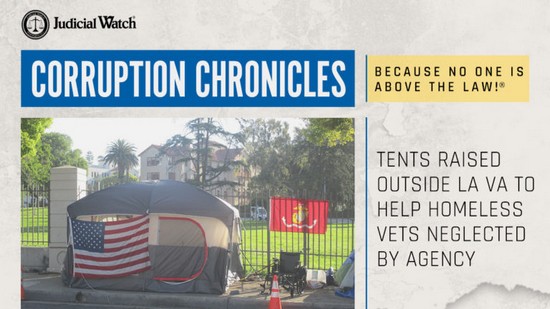 Though it has vast resources and land to do it, the Los Angeles Veterans Affairs refuses to help the area’s homeless military Vets—many of them disabled—so Judicial Watch launched a program offering temporary housing during the COVID-19 pandemic. It may not be a long-term solution, but at least those who served their country will have shelter during the health crisis, which has deeply impacted the city’s enormous homeless population. Several large tents are being erected adjacent to the VA’s lush West L.A. grounds, creating a “Veterans Row” donated by Judicial Watch and other heartbroken Americans who believe Vets deserve better. “The VA ignores and abuses them while the massive land deeded to them on the other side of the fence is used for non-Veteran things,” said Robert Rosebrock, a 78-year-old U.S. Army Vet and activist who leads a troop called the Old Veterans Guard. For more than a decade the group has conducted peaceful demonstrations to protest the VA’s failure to make full use of the property to benefit Veterans, particularly those who are homeless.

A few weeks ago, Judicial Watch reported the VA’s laughable move of providing a few Vets small pup tents in the parking lot of its healthcare system campus, excluding thousands of others who sleep on the sidewalk surrounding the lush 338-acre property. The sprawling parcel was deeded to the federal government over a century ago for the specific purpose of caring for disabled Veterans, yet the grounds are used for many unrelated causes while needy Vets are neglected. Among them is a stadium for the University of California, Los Angeles (UCLA) baseball team, an athletic complex for a nearby private high school, laundry facilities for a local hotel, storage and maintenance of production sets for 20th Century Fox Television, the Brentwood Theatre, soccer practice and match fields for a private girls’ soccer club, a dog park and a farmer’s market. “There shouldn’t be one homeless Vet in L.A.,” Rosebrock said. “That’s what this facility is for; to help them.”

The scattered pup tents in the parking lot are a joke because they only accommodate around 25 Vets, said Rosebrock, who visits the site regularly. Furthermore, the tents are too small—around three feet high and three feet wide—and older Vets as well as those with physical disabilities have tremendous difficulty crawling around in them. The VA would not accept donations of larger, more sensible and practical 14 by 10-foot tents. Instead, the bigger and more comfortable tents will line “Veterans Row” on the other side of the black iron fence that barricades the VA grounds. A wheelchair sits outside one of the first big tents to be raised on the sidewalk outside the VA property. It belongs to a disabled Vet who never would have been able to drag his ailing body into a pup tent. The new “Veterans Row” tent is also draped in the American Flag and a U.S. Marine Flag is affixed on the fence next to it. “These are war-injured Veterans,” said Rosebrock, who has made it his mission to help the area’s needy Vets.

Since 2008 Rosebrock’s group has assembled at the “Great Lawn Gate” that marks the entrance to the Los Angeles National Veterans Park to protest the VA’s failure to make full use of the property to benefit Veterans. The elderly Vets have been a thorn in the agency’s side and federal authorities have retaliated against them for denouncing the fraudulent use of the facility, including a scam involving a VA official who took bribes from a vender that defrauded the agency out of millions. VA police harass and intimidate the senior Vets at their weekly rallies and Rosebrock got criminally charged for posting a pair of four-by-six-inch American Flags on the outside fence on Memorial Day in 2016. Judicial Watch represented Rosebrock in the federal case and a judge eventually ruled that Rosebrock was not guilty of violating federal law for displaying the flags above the VA fence. In the meantime, the VA illegally rents its grounds to institutions that don’t serve Veterans and evicts groups dedicated to helping them.