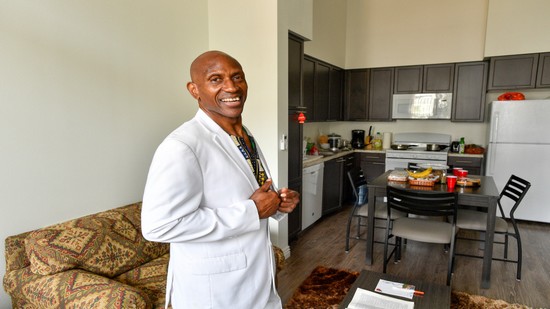 Open for Independence Day, the 75-unit complex in Santa Ana offers subsidized housing and a host of services to people who served our country.

ickey Jones, a homeless Army Veteran, was so eager to move into the new Veterans-only housing complex being built in West Santa Ana, that he started parking his cherished blue-on-white 1993 Cadillac DeVille a few blocks away every night. Just to be nearby.

Homeless for most of the past decade, Jones, 63, had been sleeping in his car for more than a year and moved to his new parking spot in November. He says he grew so familiar to police, they would come by and knock on his window — not to roust him but to check on his well being. They knew he was waiting to move in to one of the 75 apartments at the Heroes Landing project.

Miles away, in Long Beach, Jason Bowman tracked the progress of what he expected to be a fresh start for him and two ex-servicemen buddies. They all lived in the same homeless shelter. They all wanted better lives.

A Navy Veteran who grew up in Fullerton, Bowman learned about Heroes Landing in February from the Veterans Affairs Community Resource and Referral Center in downtown Santa Ana. He and his friends quickly qualified for the vouchers issued by Veterans Affairs Supportive Housing because they served in the military and, in civilian life, have struggled with housing.

Bowman, 50, always had the same question when he spoke on the phone — daily — with the Heroes Landing on-site property manager, Eileene Humerez: “Can we move in today?”

Jones, Bowman and other struggling Veterans got keys to their apartments last month. Their one- and two-bedroom units came fully furnished, with a bonus gift of kitchen utensils and other household essentials, thanks to generous donors.

By the beginning of July, with tenants moving in gradually — they’re taking precautions because of COVID-19 — the three story, Spanish revival style building at 3312 W. First St. was about 75 percent occupied. With a gated community on one side, and a Buddhist temple on the other, the apartment site previously was an asphalt parking lot.

The $29.7 million development, a project of Jamboree Housing Corp. that once went under the name “Santa Ana Veterans Village”, was slated to open in late March. But winter rains, followed by the coronavirus crisis, pushed back opening day.

By early June, when the doors opened, Bowman and his two friends were the first tenants to arrive.

“We’re here. And we have a home,” said Bowman, who has struggled with alcohol much of his life and, like Jones, had been living out of his car for a year before he got help from the VA. He ended up at a Long Beach rehab center, where he stayed another year. That was his last stop before Heroes Landing.

The three Veterans, who each have their own one-bedroom apartments, love the place so far, even if the amenities, such as the TV lounge, gym, outdoor barbecues, and computer lab, are off limits for now to group gatherings.

“It’s wonderful,” Bowman said the other day, as he sat for an interview across from an artistic image of a large American flag that adorns one wall of the lounge, where an acoustic guitar and mandolin wait for someone to play. He wore an outfit similar to what he had on when he moved in — black baseball cap with a black Stars and Stripes logo, black polo shirt, and grey-motif camouflage pants.

Part of the sense of security is knowing that Humerez — their neighbor at Heroes Landing as well as the property manager — has a good understanding of how service members live and the hurdles they face after being discharged. Humerez is an Air Force Veteran who still serves in the reserves, even though she’s six months pregnant with her second child. She can relate to the tenants

“They know that I’m going through similar situations,” she said.

The rent for the Veterans at Heroes Landing is subsidized by what is known as a HUD-VASH voucher, a program of the federal Dept. of Housing and Urban Development and Veteran’s Affairs to help end chronic homelessness among Veterans. The average rent is around $270, but for some it’s as low as $200. Personal income can’t be higher than 30 percent of the area’s median income.

Jones, who joined the Army at 17 after finishing high school in Houston, expresses the same gratitude as Bowman. He has bipolar disorder and his life has been an odyssey of good times and bad times in different places around the country. Now, financially dependent on military disability pay, he is in a safe haven that provides not only an apartment but a host of supportive services provided on-site.

His move to Heroes Landing ended up being timely. His Caddy’s engine caught fire recently, so he relies on the bus that stops nearby. The location for Heroes Landing, situated between Harbor Boulevard and Fairview Avenue, was chosen for its proximity to public transportation, grocery stores and eateries. There’s also a weekly free shuttle to the VA in Long Beach.

“There’s nothing that I don’t like,” said Jones, who enjoys shooting hoops in the private courtyard at the center of the U-shaped complex.

Most importantly, he adds, “This is for Veterans.”

Raised beds in the courtyard await a vegetable garden to be planted and tended by residents. Every apartment has a balcony or a small patio. There’s a dog run and a short, paved walking trail for contemplation. The doors to the apartments, the lobby entrance, and every amenity can only be opened by a key fob issued to each resident. Jones wears his fob on a lanyard around his neck.

Heroes Landing, a name chosen by the public, could be any modern-day, stylish complex. But a few special touches tell a visitor that Jones is right in his conclusion: It is Veteran-centric, inside and out.

Embossed paver bricks surround the flagpole in the courtyard. A fundraiser for Vets helped purchase the “Welcome Home” packages of pots and pans, linens and (a recently hard-to-get item) toilet paper. Names of the donors include major supporters of the project, such as Home Depot, whose foundation contributed a $500,000 grant, and Veterans Legal Institute, which provides pro bono legal services to Veterans.

A floor-to-ceiling mural in the lobby depicts service members from the Air Force, Army, Navy and Marine Corps — male and female. It was created by Faces of Santa Ana artist Brian Peterson, whose nonprofit specializes in portraits of homeless people.

Supported by the city of Santa Ana in developing Heroes Landing, Jamboree pulled together a coalition of organizations to provide on-site resources: the VA Long Beach Healthcare System, Goodwill of Orange County’s Tierney Center for Veterans Services, Veterans Legal Institute, and the supportive services groups Strength in Support and Step Up.

The Santa Ana project is the largest of two Veterans housing complexes opening this year in Orange County. The other, a 49-unit complex in Placentia, is planning a grand opening on July 22.

Angelica “Angie” Zamora, a Navy Veteran who works for Step Up, helps coordinate the services for the residents at Heroes Landing.

“We want to make sure if a Veteran is in need of something, we are actively providing it to them,” said Zamora, who was born in El Salvador and grew up in Bell Gardens.

No. 1 on that list is dealing with medical conditions. Too often, Zamora said, Veterans will put off for too long health visits to the VA, or are unaware of assistance available to them.

“Whatever they were not aware of, we’re making sure those resources come to them.”

One other thing Zamora wants them to know: “This is their forever home.”