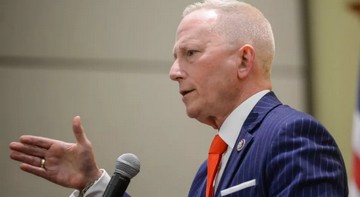 After a New Jersey Veteran died by suicide outside a Department of Veterans Affairs clinic in Northfield five years ago, a government watchdog criticized the lack of prompt appointments and follow-up care, and the VA said it had fixed the problems.

But after a Somers Point Veteran being treated at the same clinic tried to kill himself last month, Rep. Jeff Van Drew called for an investigation into whether the problems truly had been fixed.

Van Drew, R-2nd Dist., has asked the VA’s inspector general to look into the Wilmington, Delaware, VA center and the Northfield clinic that it oversees, to see if the attempted suicide by Chaoe Perry of Somers Point was an aberration or a continuation of a long-standing deficiency in getting troubled Veterans the care they needed.

“I have a responsibility to find out what all the facts are relating to this case because it’s an awful thing for anybody to have to go through,” Van Drew told NJ Advance Media. “I know they’re working very hard over there at the clinic and really trying to do everything that they can.

“I think things have improved a great deal. I just want to see where we are, so a good independent set of eyes is always invaluable.”

He asked McDonough in a letter to have VA staff on call 24 hours a day, seven days a week, since otherwise Veterans in South Jersey need to make appointments at a local clinic or travel to Wilmington.

“These barriers to immediate access for Veterans in need are a burden on South Jersey Veterans and have clearly impacted the lives and well-being of my constituents,” Booker said.

The VA said in a statement that mental health care at Wilmington has “improved significantly,” including through steps such as making Veterans more aware of services, hiring more providers in South Jersey and creating a mobile crisis response team for Atlantic and Cape May counties.

Perry, who had been receiving mental health treatment at Northfield, set himself on fire Nov. 20 at an Atlantic City gasoline station. He survived. Perry’s spouse said he could not get the services he needed beyond his regular appointments with a therapist and psychiatrist, Van Drew said.

The incident was reminiscent of the 2016 death of Charles R. Ingram III of Egg Harbor Township, who had been waiting three months after requesting to see his psychologist before setting himself on fire outside the Northfield clinic.

The IG report criticized the lack of prompt appointments and follow-up care, saying procedures were needed to better track patients, to provide timely appointments and to follow up if someone misses a session.

The VA said it agreed with the recommendations and said the procedures would be in place by 2018.

Van Drew said the VA planned to triple the size of the Northfield clinic, while Booker introduced legislation in November to make New Jersey and nine other states eligible for additional Veterans clinics.

— Vet Center Resources. Vet Centers provide free individual and group counseling for combat Veterans and their families. you and your family, even for those who do not receive VA health cate or disability compensation.