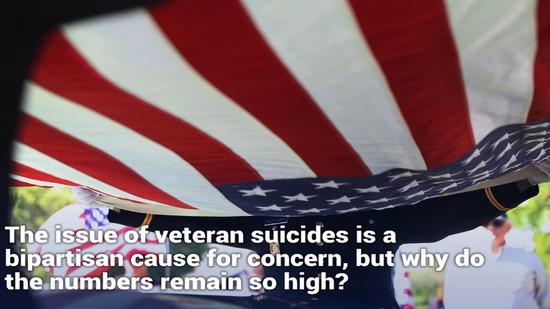 In an effort to end Veteran suicide, President Trump released his plan that is designed to bring federal agencies together with state and local governments to focus on a problem he notes is costing us “20 service members and Veterans a day.”

I applaud President Trump for this and I would like to add some perspective to this national conversation, as we too often just accept a misunderstanding that makes it difficult to honestly address this problem.

While I was in the Army, suicide was something I never understood or considered. It baffled me; that is, until I lay in a hospital burn unit after I was grievously wounded on the battlefield.

I’d be lying if I said I never wished for death then. I was wounded horribly, which suddenly extricated me from the career, role and identity that made me whole.

I’d never imagined how much it would hurt to lose my capacity and identity involuntarily. I loved being a Green Beret and was not prepared to lose that identity.

Next came a long, hard road of surgeries, therapy and learning to walk again. After considering myself a guardian of freedom for so long, it hurt bad to not be able to take care of myself for so long. And I had it easy. So many have paid the ultimate price.

For more than two decades, the military had taught me how to turn the ready switch on, unconditionally. When that ended, I was left trapped with a switch still stuck in the on position. As difficult as this has been for me, I sometimes break out in a cold sweat when I consider how many of our younger Veterans have to make this transition with far less life experience than I had at the time.

Soldiers like to say that after combat any kind of life at home is easy. That’s a lie; in fact, it can be torturous when the problems just keep coming. Family, relationships and financial issues are enough to ruin people who have otherwise easy lives. When this happens to a Veteran battling for a sense of purpose after being damaged in war, they can give in to despair.

Hope comes with a rebuilding of a useful and positive identity. This is hard, as the solution then is dependent on each individual.

I once started to add up the Veterans I knew who committed suicide. I soon had to stop picturing their faces, as there are so many.

Each of these lost Veteran’s individual stories are complicated, but through personal experience and by meeting so many, I’d like to dispel the myth that they are going through something the rest of us can’t understand. Coming to that conclusion actually creates an impasse that can’t be bridged — even by spouses. And it’s dishonest.

Sure, a civilian who has never been to war won’t know the smell, the taste and feel of battle and death in that gruesome manner. That’s true. But everyone suffers. Many people see tragic things they can’t erase from their memories; still, they can’t exactly explain these things so that another person can completely see and feel them, but this doesn’t mean that others can’t relate.

This is critical because I’ve found again and again that what saves lives is developing a new purpose, one built on a refashioned and positive identity. In contrast, playing the victim, which we actually encourage Veterans to do in this society, isn’t good for anyone, least of all the Veterans. Empathy is important, but after a while treating them as if their identity is their wounds is damaging and can actually prevent them from healing psychologically.

Hope comes with a rebuilding of a useful and positive identity. This is hard, as the solution then is dependent on each individual. But we can all help them get there by realizing we can relate to them as human beings. Our government agencies, when they try to help them psychologically, need to help them find a new purpose as fathers and mothers, in a new career and more.

Right now we are losing many of these Veterans as they get stuck between the chapters of their great stories. We need to help them see the great stories they are living, not just a chapter that might have ended tragically.