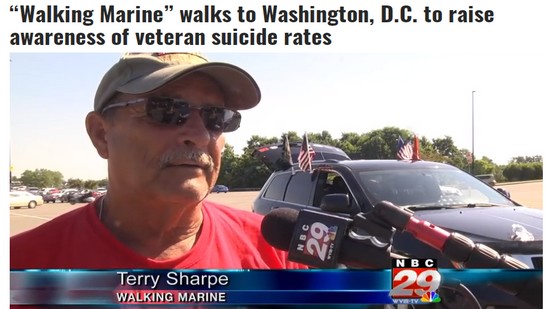 RUCKERSVILLE, Va. (WVIR) - A Marine Veteran walking from North Carolina all the way to the White House made a pit stop in Ruckersville today.

Terry Sharpe, aptly known as the “Walking Marine,” is walking to Washington, D.C., covering between 10 to 16 miles a day, to raise awareness about high suicide rates among Veterans.

“I’m bringing awareness to the fact that we’re losing 22+ Veterans to suicide every day. There are so many people who don’t have an idea that this is happening,” Sharpe explained. “So everybody that we can make aware of it, that more many people will know that we are losing our Veterans at a rapid rate.”

Sharpe is aided by support vehicles that follow him to provide assistance when needed.The former marine is also raising to support housing and rehabilitation efforts for former service members. This is Sharpe’s eighth and final year walking to Washington, D.C., but he said the walk will still continue every year.