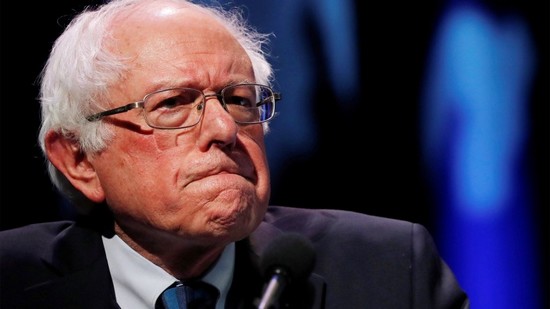 Bernie Sanders has led the charge for "Medicare for All" and has railed against the current health care system in the United States.

But a deeply personal moment on the campaign trail Friday spoke to how much the issue of affordable health care affects Americans.

Fresh from the Democratic debate, the Vermont senator began his two-day swing in Nevada with a town hall, where people opened up and got intensely personal about their issues with health care.

During the Friday event in Carson City, a Navy Veteran named John shared with Sanders that he is $139,000 in debt because his health insurance, Tricare, a program for the military, is no longer accepted.

Sanders listened intently as John, who said he served 20 years in the military, revealed that he has been diagnosed with stage four Huntington's disease, a neurodegenerative disorder.

When asked by Sanders how he is going to pay off his debt, John said, raising his voice, "I can't, I can't, I'm gonna kill myself."

The senator cut him off -- "Hold it. John, stop it. You're not gonna kill yourself. Stop it," Sanders said.

"I can't do this," John said with frustration in his voice. "I have Huntington's disease. Do you know how hard it is? You know, you probably don't, do you? I can't drive. I can barely take care of myself."

"Alright, let's chat later at the end of the meeting, okay?" Sanders said to John.

As promised, Sanders and his wife Jane spoke with John after the campaign event ended.

Sanders shared with CNN that in this conversation with the Veteran, he made sure his team got the correct contact information.

"What I wanted to make sure is that I got the correct information because what I did not want to happen is just him talking about his story but not being able to follow up with him," Sanders said.

"He told me he doesn't answer his phone very much because there are bill collectors calling him up every day," Sanders said of what he learned when speaking with the Veteran further.

Sanders also shared that his team has already gotten in touch with one of the Nevada senators about this Veteran's situation.

"We have already been in contact with one of the Nevada senators. We're going to get in touch with the entire Nevada Congressional delegation to get him the help that he needs," the Vermont senator said.

"We will follow up on Monday," Sanders later added.

"Here is somebody who put his life on the line to defend this country, a Veteran, dealing with a terrible, terrible illness, and what was obviously very unsettling is when he used the word suicide," Sanders told CNN when reflecting on his interaction. "That was the most dramatic and painful moment of the whole town meeting," he added.

"This should not be going on in America, not for a Veteran, not for any person in this country, and it is beyond comprehension that under the current healthcare system, somewhere like a half a million people go bankrupt every year because of medical bills," Sanders told CNN.

"Clearly we are not doing what we should be doing to make sure that every Veteran in this country gets all of the quality healthcare they need when they need it," he said.