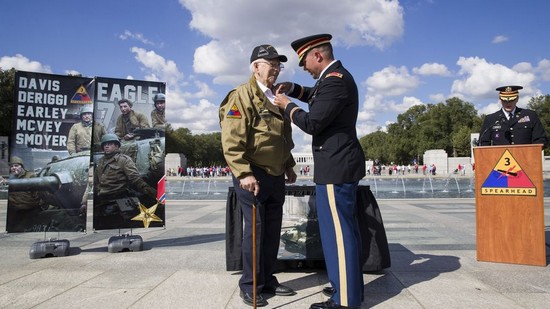 Clarence Smoyer received the surprise — and the award — of a lifetime Wednesday, when the Army bestowed on him the Bronze Star for his heroism as a tank gunner during World War II.

Flanked by a Sherman tank parked on the National Mall just behind the World War II Memorial, Mr. Smoyer and relatives of three of his late crew members received the medal during a special ceremony featuring dignitaries and more than 100 other Veterans of the war.

An Army brass quintet performed, and dignitaries lauded the service of the 95-year-old native of Allentown, Pennsylvania, and others of his generation.

“I can’t help but marvel at such men in their early 20s, who must’ve been terrified, but they didn’t waver in their duty,” said Sen. Pat Toomey, Pennsylvania Democrat. “They carried out their mission. It’s amazing.”

Adam Makos, author of “Spearhead,” which documents the exploits of Army tank crews as the European conflict drew to a close, called Mr. Smoyer “the most lethal American tank gunner in World War II.”

The former soldier recalled the men he served with — such as Pvt. Homer Davis, Pfc. John Deriggi and T/5 William McVey, who were awarded Bronze Stars posthumously during Wednesday’s ceremony.

“I remember all the young boys who lost their lives in the war,” Mr. Smoyer said after the ceremony. “So many men lost their lives. My cousin was killed over in France. Also, my brother-in-law was killed about the same time. They never had a chance to really live their lives. I always feel something for them.”

In urban combat on March 6, 1945, in Cologne, Germany, Mr. Smoyer — as the gunner — knocked out a Nazi super-tank beneath the Cologne Cathedral. The opening allowed American troops to overtake a key bridge over the Rhine River during the Allies’ push toward Berlin.

Mr. Smoyer is credited with destroying five German tanks during his service.

On Wednesday, he spoke about his general’s orders upon arriving into Cologne in 1945.

“Gentlemen,” he said his commanding officer told the troops, “let’s knock the hell out of them.”

Though known as “the hero of Cologne,” Mr. Smoyer forfeited his eligibility for a medal of valor after being seen speaking with German children who asked for bubblegum.

Nearly 75 years later, the Army decided to excuse his violation of the non-fraternization policy and awarded him the Bronze Star. Mr. Smoyer wore the medal proudly Wednesday, pinned to his jacket.

The Bronze Star is awarded to U.S. troops who distinguish themselves by heroic or meritorious achievement or service.

According to military records at Fort Knox, nearly 400,000 Bronze Stars were awarded during World War II and more than 700,000 for the Vietnam War.