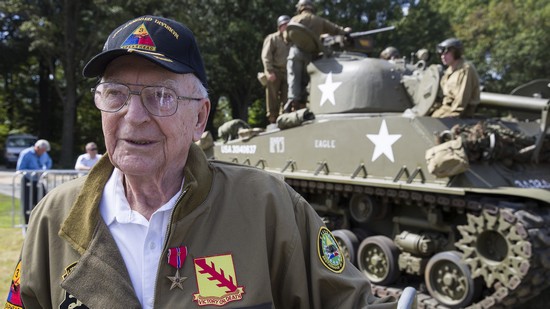 A 96-year-old Veteran described as “the most lethal American tank gunner in World War II” received a Bronze Star nearly 75 years after his service.

Clarence Smoyer of Allentown, Pennsylvania, came to the nation’s capital expecting to head to the Pentagon and sign copies of Spearhead, a book by Adam Makos detailing his service as a tank gunner during World War II. He was instead greeted by a full Army color guard and a special ceremony at the World War II Memorial.

As an Army brass quintet played, Smoyer was bestowed the honor during the event, which was attended by dignitaries, more than 100 Veterans, and relatives of three of his late crew members. During the commemoration, a Sherman tank sat parked symbolically on the National Mall nearby.

Smoyer, known as “the hero of Cologne,” was told he would receive a Bronze Star during the war, but days later he was spotted talking to German children and scouring his pockets for bubblegum to give the kids. He was charged with fraternization with the enemy and forfeited his ability to receive a medal of valor. But decades later, Makos helped convince the Army to reverse the decision so that Smoyer could get the same honor as others who served alongside him.

“I can’t help but marvel at such men in their early 20s, who must’ve been terrified, but they didn’t waver in their duty,” Toomey told the crowd. “They carried out their mission. It’s amazing.”

Makos said Smoyer was the “most lethal American tank gunner” during the war.

Smoyer is credited with destroying five German tanks during the time he served, including in 1945 when he took out a Nazi super tank beneath the Cologne Cathedral, allowing U.S. forces headed to Berlin to overtake a key bridge and continue on.

In addition to Smoyer, some of the men he served with also were posthumously awarded Bronze Stars at the ceremony, including Pvt. Homer Davis, Pfc. John Deriggi, and T/5 William McVey. The legendary gunner recalled their deaths after the commemoration concluded.

“They never had a chance to really live their lives. I always feel something for them,” he added.

The Bronze Star is a medal awarded to soldiers who show heroic or meritorious achievement or service in a combat zone.