Do Veterans lack social-emotional skills? A major study finds that many civilian employers believe they do. 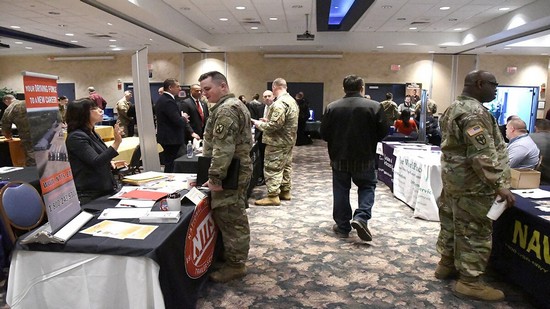 Just based off their resumes and cover letters, Veterans’ military service is working against them when they apply for jobs in certain fields, a new study says.

The study — conducted by Duke University’s Fuqua School of Business and released Sept. 24 — found employers believe Veterans are less suited for jobs that involve social-emotional skills and interacting with people than their non-Veteran counterparts.

Veteran service organizations like American Legion, however, take issue with the study, saying it promotes the stereotype of Veterans as brooding malcontents.

The study, which was comprised of a total of 10 smaller surveys evaluating perceptions of Veterans in the workforce, also consistently found employers and others rated Veterans as a better fit for jobs working with things rather than people. Employers, managers, and laypeople participated in the surveys.

“When choosing between two equally-qualified job candidates, the average person and even prospective employers show a tendency to prefer the applicant without military experience for jobs requiring social-emotional abilities,” Aaron Kay, a Fuqua management professor and senior author of the research, said in a Duke news release.

For example, Duke partnered with a “large North American restaurant chain” where 265 employees evaluated samples of hypothetical resumes of Veterans and non-Veterans for a dishwasher, a prep cook, and a bartender.

Other surveys included in the study compared perceptions of Veterans and non-Veterans with average people not involved in hiring, and found similar results.

“Those who have careers related to hiring and evaluating employees appear to have the same biases as the public, and appear to not curb these biases when evaluating the applicants that we presented them with,” the study said.

In order to counter some of these perceptions associated with Veterans, the study found that editing resumes and “merely signaling one’s ability to feel can reduce people’s biases regarding Veterans’ abilities and skills.” A total of 298 participants reviewed Veteran and non-Veteran candidates for an event planning job, and were given adjusted resumes to indicate the candidates either did or did not have an ability to feel.

When the Veteran’s resume did include volunteer work at a humane society where they “calmed animals when stressed,” Veterans were ranked similarly to their non-Veteran counterparts for their social-emotional skills.

The study confirms what Veterans have already known about biases in the workplace, according to Iraq and Afghanistan Veterans of America CEO Jeremy Butler.

“We have long known that employers hold biases against hiring Veterans, despite employers’ claims to the contrary,” Butler said in a statement to the Military Times. “Bringing these issues out into the open is the key to ensuring that Americans don’t just thank us for our service, but truly honor that service by recognizing the value Veterans bring into the workplace.”

Louis Celli, executive director of government and Veterans affairs for the American Legion, took issue with the results of the study and said they “promote the brooding lone wolf idea of what a Veteran is.”

“Millions of Veterans reintegrate into the community every year and go on to use their technical and leadership skills to work alongside their non-Veteran peers, become captains of industry, even get elected to public office," Celli said in an email to the Military Times.

He also noted that the military has a range of occupational specialties — including customer relations and positions that involve interacting with the public. Likewise, he pointed out service members must be articulate when communicating orders, and said military service fosters “emotional intelligence and promotes team diversity leadership skills.”

“Without interpersonal skills, the military would not be able to successfully work with their foreign military cohorts, tribal leaders, or recruit new enlistees,” Celli said. “So, it is sad to know some non-Veteran hiring managers commonly associate former military leaders with what they see at the movies, and our research shows that companies who are able to look past these stereotypes are richer and more productive for it."

For Duke, the research on this issue is not completed.

“Our research suggests there could be ways Veterans could present their skills that can help them overcome these perceptions,” Kay said. “We are going to keep working on understanding these hiring biases and how to eliminate them, as well as working with Veterans to understand their experiences as they transition to the workforce.”

Rules of Conduct
1 Keep it Clean. Please avoid obscene, vulgar, lewd, racist or sexually-oriented language.
2 Don't Threaten or Abuse. Threats of harming another person will not be tolerated. AND PLEASE TURN OFF CAPS LOCK.
3 Be Truthful. Don't knowingly lie about anyone or anything.
4 Be Nice. No racism, sexism or any sort of -ism that is degrading to another person.
5 Be Proactive. Use the 'Report' link on each comment to let us know of abusive posts.
6 Share with Us. We'd love to hear eyewitness accounts, the history behind an article, Forum Post, or actual Experience.
7 Please do not add any web links to your comments unless specifically directing to a VA Web site page.
JComments
Category: Veterans