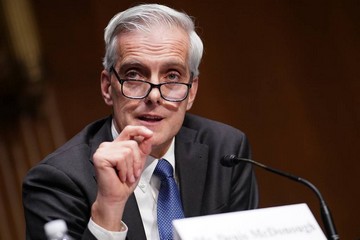 Congress won’t start dealing with the federal budget again in earnest until after the holidays, but Veterans Affairs Secretary Denis McDonough isn’t waiting until then to sound the alarm on the issue.

“It would have a significant negative impact,” he said.

“The Veterans Health Administration budget would be shorted $941 million in community care funds. … The construction account would be $458 million below the president’s request, causing delays and cost increases. And the Veterans Benefits Administration would be $259 million lower, which would prevent us from hiring and training staff.”

The new fiscal year for the federal government began Oct. 1 without a new budget adopted by Congress. Lawmakers twice have extended fiscal 2021 spending levels into the new fiscal year, with those authorities set to end in mid-February.

House and Senate leaders will have to reach a new budget extension or negotiate a full-year budget plan by then in order to avoid a partial government shutdown.

But McDonough — along with other administration officials — are warning that another budget extension will hurt federal operations and that lawmakers should finalize plans for a full-year spending deal instead.

“It’s a source of concern for me and it is occupying a good amount of my time right now,” McDonough said. “This is a natural time, as we come to the end of the calendar year, to be thinking ahead about the kinds of things that will be major priorities for us when we flip the calendar, and this [budget problem] is on my mind.”

All of those increases have been on hold for the last three months as department officials await a new budget. The budget extensions have locked them in at fiscal 2021 spending levels, without the planned plus-ups for those programs.

Without those increases “I can’t rule out impacts on individual Veterans’ lives,” McDonough said.

“We’ll obviously work really hard to mitigate that,” he said. “But, especially in the context of the ongoing pandemic, I’d hate to have to make these sets of balancing decisions.”

The VA budget proposal has not faced specific opposition from either party on Capitol Hill, but has been stalled because of broader budget fights among Democrats and Republicans.

Lawmakers are expected to resume their budget deliberations when they return to Capitol Hill in January.