Decreasing cervical cancer – one HPV vaccine at a time 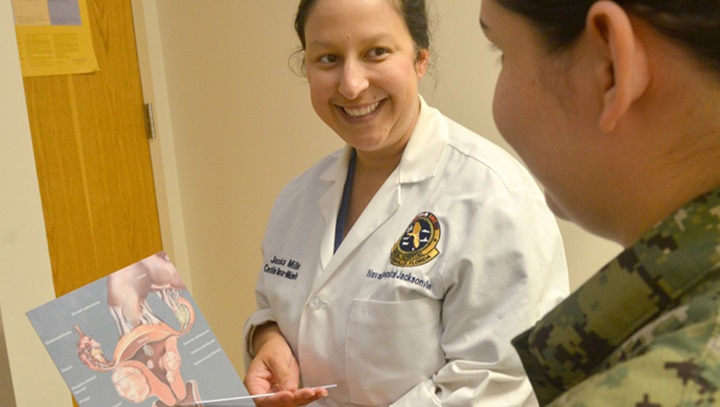 Cervical cancer was once one of the most common causes of cancer death for American women, according to the American Cancer Society (ACS).

With increased use of the Pap test, the cervical cancer death rate has dropped significantly. However, approximately 13,800 new cases of invasive cervical cancer are diagnosed annually, and more than 4,000 women die from the disease each year, numbers from the ACS indicate.

Cervical cancer affects the uterine cervix, a part of the uterus, which can create problems with infertility and blockage of the urinary and bowel tracts. Early detection and prevention methods are key to help women fight and prevent this form of cancer.

According to the Director of Gynecologic Oncology at Walter Reed National Military Medical Center, Air Force Col. (Dr.) Yovanni Casablanca, early stages of cervical cancer could display no symptoms, which is why regular visits with an OB/GYN are important. “Usually, the way we know something is going on is that the cervical pap tests are abnormal,” Casablanca said.

While cervical cancer is usually seen in women in their 30s, 40s and after menopause, there are preventative measures a woman can take to reduce their risk.

“There are over 60 different strains of HPV, but only certain types, high risk types, are associated with cervical and other cancers,” said Casablanca, about the cancer-causing Human Papillomavirus. “I tell my patients that HPV is a ‘part of life,’ it is very common and everyone who has had skin-to-skin contact with another human has likely been exposed to some strain of HPV. Folks who are exposed to higher risk strains, smoke, or have immunosuppression might be susceptible to the consequences of HPV.”

Casablanca encourages both men and women to get the HPV vaccine in early puberty, before sexual activity begins. The vaccine is highly effective in creating immunity to most of the high-risk strains of HPV. Infection to HPV can be increased through tobacco use, multiple sexual partners, and early onset of sexual activity.

“Any age, race, and ethnicity can get cervical cancer, and it only takes one partner to expose you to HPV,” explained Casablanca.

Treatment for cervical cancer can involve invasive surgeries, which a portion of the cervix is removed. For women who don’t wish to retain fertility, they may sometimes opt for a hysterectomy, removal of the uterus. Like most cancers, in a more advanced phase, chemotherapy and radiation treatments are used.

For more information about cervical cancer, refer to the National Cancer Institute.