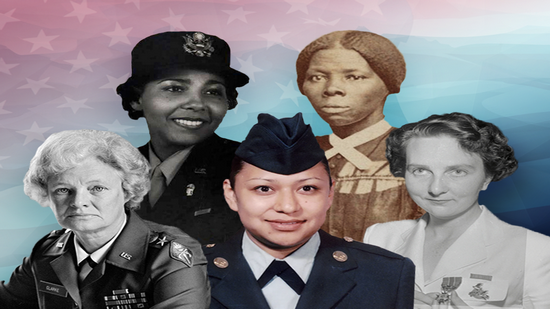 The U.S. Army has 10 installations named after Confederate generals. Zero are named after women

Should the U.S. military remove the names of Confederate generals from its Army bases in the South? The longstanding debate was recently revived by demonstrations against police brutality—and just as quickly quashed by President Donald Trump, who refused to consider the idea despite reports military officials were open to the move.

Among the prominent officials who voiced their interest in losing the names of generals who turned their backs on the United States were David Petraeus, a retired U.S. army general and former director of the CIA, and Robert Gates, former defense secretary under the Bush and Obama administrations. “It’s always puzzled me that we don’t have a Fort George Washington or a Fort Ulysses S. Grant or a Fort Patton or a facility named for an African-American Medal of Honor recipient,” Gates told the New York Times. “I think the time has come, and we have a real opportunity here.”

Five Women Veterans Who Deserve to Have Army Bases Named After Them.

The U.S. Army has 10 installations named after Confederate generals. Zero are named after women

Women we should name bases after illustration.

Should the U.S. military remove the names of Confederate generals from its Army bases in the South? The longstanding debate was recently revived by demonstrations against police brutality—and just as quickly quashed by President Donald Trump, who refused to consider the idea despite reports military officials were open to the move.

Among the prominent officials who voiced their interest in losing the names of generals who turned their backs on the United States were David Petraeus, a retired U.S. army general and former director of the CIA, and Robert Gates, former defense secretary under the Bush and Obama administrations. “It’s always puzzled me that we don’t have a Fort George Washington or a Fort Ulysses S. Grant or a Fort Patton or a facility named for an African-American Medal of Honor recipient,” Gates told the New York Times. “I think the time has come, and we have a real opportunity here.”

For historian Kara Vuic, there’s no time like the present to do something about both. “It fits [the Army’s] goals and their own regulations to name installations after people who can be an inspiration to their fellow soldiers—heroes and distinctive individuals,” says Vuic, a professor at Texas Christian University who studies war, gender and the U.S. military.

Though women only became full, permanent members of the U.S. Armed Forces in 1948, they have been part of the Army since its earliest days. Women have always served alongside American men at war, whether as cooks or laundresses, nurses or spies, or even disguised as soldiers. But it took generations for women to win the right to officially serve their country, and women waited until 2013 for acknowledgment of their right to serve in combat roles. Today, 181,000 women serve in the Army, and women make up 18 percent of the Army and 36 percent of its civilian workforce.

The names on Army installations “didn’t fall from the sky,” says Vuic. “They aren’t innate to the buildings.” Instead, she says, they reflect a series of choices to uplift a variety of individuals—distinctive officers, engineers, even Confederate generals—choices that have yet to reflect women’s importance within the Army itself. “This is a great moment for the Army to really reckon with its own past,” says Vuic. “The military is one of the most diverse institutions in our society. Renaming bases might hold up a better standard that the Army can hold itself accountable to.”

Whether the names of Confederate generals are removed or not, here are five women with names worthy of one day gracing Army installations:

Harriet Tubman is best known for helping more than 700 enslaved people gain their freedom after fleeing slavery herself. But her tactical skills also made her a vital Army asset during the Civil War.

Born into slavery in Maryland in 1822, Araminta Ross, who later married and changed her name, escaped in 1849. She would return South again and again to help other enslaved people escape and find safe passage to free states and what is now Canada.

At the outset of the Civil War, Tubman began working at U.S. Army camps designed to aid escapees, but it didn’t take long before she became a scout and a spy. Though she served in an unofficial capacity, she was commanded by Army officers and held her own.

Not only did Tubman provide information that proved vital to the army’s operations, but she went on to lead the armed assault of plantations across South Carolina’s Combahee River. The Combahee Ferry Raid—the first armed assault to be led by a woman during the Civil War—surprised Confederate troops. Led by Tubman, 150 black soldiers from the 54th Massachusetts Infantry Regiment overran Confederate plantations, and freed 700 people despite the efforts of slavers and Confederate troops to stop them.

After the war, Tubman devoted the rest of her life to helping formerly enslaved people get on their feet. But she struggled to get recognition for the service she rendered the United States. “Tubman received only $200 for her service in the military and did not begin to get a pension until the 1890s—and that was for her husband’s military service, not her own,” writes Alice George for Smithsonian. “Nevertheless, when she died in 1913 at about 91, she was buried with full military honors.”

Like thousands of women who came before her, Edith Nourse Rogers went to war in an unofficial capacity, but through her own determination, became one of the Army’s most steadfast allies and innovators. During World War I, the newlywed served as a field hospital inspector and Red Cross volunteer nurse in France. “No one could see the wounded and dying as I saw them and not be moved to do all in his or her power to help,” she wrote later. Rogers returned from the front dedicated to Veterans’ causes, and her nursing at Walter Reed General Hospital earned her the nickname “the angel of Walter Reed.”

When her husband, a congressman from Massachusetts, husband died, Rogers took his seat and embarked on an 18-term career in the House of Representatives—a legislative career that would see her involvement in a variety of laws affecting Veterans and servicemembers. She sponsored the creation of Veterans’ hospitals and got pensions for women Army nurses. She voted for the Selective Service Act, which established the draft during World War II. She sponsored of the GI Bill of Rights, which helped returning white Veterans access education and low-interest loans, and suggested that the federal government establish a Department of Veterans Affairs.

Rogers paved the way for women to participate in the Armed Forces, too. She remembered the plight of women volunteers in World War I, who had gone overseas on their own dime and were given no medical care, food, housing or disability benefits despite the essential services they rendered. In 1941, she proposed that the Army create a paid program in which American women could enlist and serve their country in non-combat roles.

The Women Army Auxiliary Corps (WAAC) brought women into the war—and a year later, Rogers brought them into the military, too, with a bill that created the Women’s Army Corps (WAC) and granted them military status. Over 150,000 women served as WACs, the first to serve the Army in non-nurse roles, and the legislation set the stage for other branches of the military to admit women, too. Though no military installation is named after Rogers, a Veterans’ hospital in Bedford, Massachusetts, bears her name.

When Charity Adams enlisted in the WAAC during World War II, her race meant she was forced to serve in a segregated unit. She did so with distinction: Not only did the psychologist and educator become the first African American woman to serve as an Army officer, but in 1944 she led the only group of black WACs to serve overseas.

Born in North Carolina, Adams trained as a math teacher. But when the WAAC was formed, she was intrigued by the opportunity, and her initiative and drive soon made her the highest-ranking black woman in the U.S. military at the time. She worked her way up to an officer position supervising training of her fellow WACs, then oversaw the herculean effort to get undelivered mail to servicemen fighting in Europe.

Her unit completed its goal three months ahead of schedule, managing about 65,000 pieces of correspondence each day amidst the chaos of war. While overseas, she defied segregation and discrimination, refusing to buckle when a white general threatened to send a white officer to run her unit in her stead and rebelling against orders to stay in segregated quarters and relax at a segregated recreation center. Eventually, she was promoted to lieutenant colonel, the highest rank a woman could achieve in the WAC. After the war, she married, worked as an educator and administrator, and became a bastion of civic service in Ohio.

Mary Clarke enlisted in the Women’s Army Corps just before World War II ended, so it looked like her days serving her country would be short. But by the time she retired in 1981, she had worked her way up from private to major general and served for 36 years—a record for a woman.

Clarke’s service was diverse: She assisted with the Berlin Airlift of 1948-9, oversaw training and eventually became the WAC’s final director before its dissolution in 1978 and incorporation into the U.S. Army. “This action today in no way detracts from the service of WACs who have been pioneers—in fact, it honors them,” she said during the WAC’s disestablishment ceremony. She called the action “the culmination of everything the members of the Women's Army Corps have been striving for for 36 years….the Army’s public commitment to the total integration of women in the United States Army as equal partners.”

The WAC was no more, but Clarke’s Army career was still in high gear. The first woman to serve as major general, she commanded the U.S. Army Military Police School and Chemical Schools and was the first woman to command a major Army installation, Fort McClellan, named in honor of the general-in-chief of the U.S. Army during the Civil War.

Piestewa, a member of the Hopi Tribe, was the daughter of a Vietnam Veteran and the granddaughter of a World War I Veteran, both of whom served in the Army. The single mother of two small children, she was deployed to Iraq as part of the 507th Maintenance Company, which provided supplies and support for combat units.

On March 23, 2003, the Humvee she was driving was ambushed. “I had a peace—this calming feeling—because I was with Lori,” Jessica Lynch, who served alongside Piestewa, told History’s Adam Janos. “I knew that whatever we had to face, we were going to do it together. She drove us through flying bullets. At one point, I remember a bullet whizzing through the window…and she remained under control.” Moments later, Piestewa was killed by a rocket-propelled grenade, and Lynch and a fellow servicewoman, Shoshana Johnson, were taken prisoner.

In death, Piestewa was posthumously promoted to specialist and awarded a Purple Heart and a Prisoner of War Medal. Arizona officials renamed a mountain in the Phoenix Mountains Piestewa Peak, and the Lori Piestewa National Native American Games, which brings together athletes of all ages from 72 Native American tribes, still commemorates her each year. It is the largest competition of its kind.