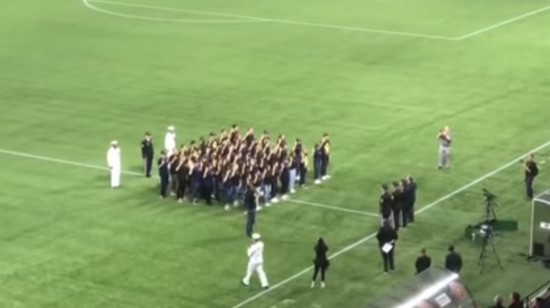 Fans at a National Women’s Soccer League game rained down boos during a U.S. Armed Forces swearing-in ceremony Wednesday after the enlistees were asked to pledge they would obey the orders of President Trump.

The ceremony took place at Providence Park in Portland, Ore., while the Portland Thorns were facing the North Carolina Courage. The event was scheduled ahead of the 2019 season when the club discovered it would be playing on Sept. 11, according to The Oregonian.

The crowd applauded the group after it took the Oath of Enlistment but booed when the enlistees were asked to “obey the orders of the President of the United States.”

The boos come as Major League Soccer came under fire for banning political banners in its club’s stadiums. The National Women’s Soccer League does not have a fan code of conduct but agreed with its partner club, the Portland Timbers, to ban political signage at Thorns games.

“All of our operational staff for Providence Park games are the same,” the club said in a statement in August. “Having different rules for different teams creates confusion among staff and for fans alike. We also believe that what is allowed, for those wishing to trumpet opposition to fascism at MLS games, is also a fair and reasonable approach for Thorns and T2 games.”